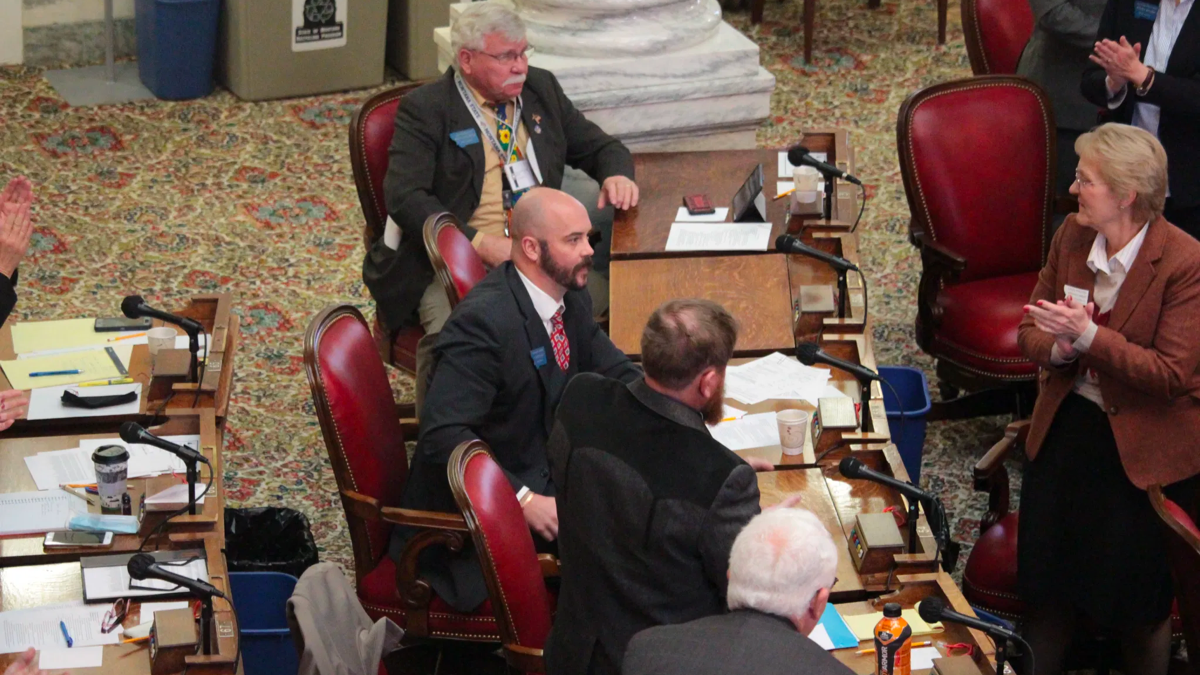 HELENA — Republican and Democratic lawmakers gathered at the state Capitol both in-person and by virtual conference calls Wednesday to select leadership for the upcoming legislative session.

Republicans, who added to their House and Senate majorities and won the governor’s office in this year’s election, picked Rep. Wylie Galt of Martinsdale as Speaker of the House and Sen. Mark Blasdel of Kalispell as President of the Senate. Both lawmakers promised to help their colleagues advance a Republican agenda they said has long been stymied by Democratic governors.

“The voters sent us here with an incredible mandate of how they want the state to move,” Blasdel told Republicans senators after he was confirmed. “And I’m prepared to help work with each and every one of you to get there.”

“The 2021 session is the beginning of a new era,” Galt said before House lawmakers cast their votes for speaker. “The people of Montana have placed Republicans in the driver’s seat for state government. It’s time for us to change how Helena does business.”

The House Republican caucus session was presided over by Rep. Llew Jones of Conrad, a longtime legislator who was a leader in the GOP Solutions Caucus group that attracted ire from hardline Republicans in 2019 for working with Democrats to pass bills including Medicaid expansion renewal. Rep. Brad Tschida of Missoula, last session’s House Majority Leader and a hardline conservative who publicly lamented the solutions caucus’ willingness to compromise, wasn’t nominated for a legislative leadership role this year.

Democrats also chose their leaders for the upcoming session Wednesday. Senate Democrats chose Jill Cohenour of East Helena to serve as Senate Minority Leader. She was elected over Tom Jacobson of Great Falls in a 10-9 vote.

“This is going to be one tough slog,” Cohenour said during the nominating process, pointing to how hard it will be for Democrats to achieve their priorities with Republicans controlling the Legislature and governor’s office.

Cohenour and Rep. Kim Abbott of Helena, who was chosen as the House Minority Leader on Wednesday, said their caucus’ priorities this session include protecting funding for public education and the state’s Medicaid expansion.

Abbott, the only nominee for the House Minority Leader position, said in a press call Wednesday afternoon that lawmakers need to decide what the session will look like with COVID-19 surging in Montana. Lawmakers from both parties and the governor’s office, she said, will likely begin informal discussions about session logistics almost immediately.

Abbott added that she hopes Republicans will make accommodations like allowing lawmakers to participate remotely, and that they adhere to social distancing recommendations and the state mask mandate to protect those who conduct business at the Capitol.

“I look forward to working with lawmakers on both sides of the aisle to lead Montana’s comeback and fulfill the mandate Montanans have given us,” Gianforte said.

Lawmakers in both parties also selected peers to serve as Whips, who function as lieutenants in each party’s respective leadership structure.

Wednesday marked the first of two days of caucuses and orientation for lawmakers before the session formally begins in January. The vast majority of Republican legislators came to Helena to caucus in-person, and without masks, despite a letter to lawmakers on Monday by Lewis and Clark County Health Officer Drenda Niemann encouraging them to caucus remotely.

As a local health official, Niemann doesn’t have jurisdiction over lawmakers when they are working in their official capacity within the Capitol building. The Legislative Services Division, Niemann noted, has written guidance for lawmakers on how to maintain a safe working environment if they choose to appear in-person, including wearing a face covering at all times and keeping at least six feet apart from others.

Few Republican lawmakers followed those precautions Wednesday, greeting each other with their usual hugs and back slaps, huddling maskless in small groups and sometimes leaving their masks around their chins during conversation. Most Democrats caucused remotely via video calls. Nearly all Democrats who attended in person wore masks for the duration of meetings and made efforts to sit several feet apart.

In a call with reporters after the caucuses concluded, Abbott criticized her Republican colleagues for what she described as “reckless” behavior.