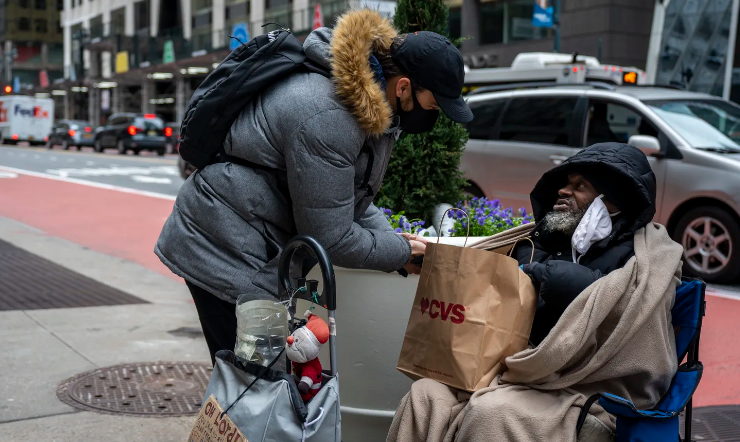 Why Some New Yorkers Choose Streets Over Shelters

Anthony Lewis, 62, hunkered down in a tattered blue canvas camping chair on the sidewalk across from the Chrysler Building as a frigid wind raced down 42nd Street.

He’d just been given a pair of gloves by a kind passerby. But the parka he wore and the thin beige blanket wrapped around him couldn’t keep Friday’s early spring cold from chilling his bones.

He’s a diabetic who must give himself insulin shots. Between the disease and the streets, his feet are a constant source of pain. On his roller cart with all his worldly possessions, he’d attached a worn Santa Claus doll and a cardboard sign declaring,

“Oh, Lord! I am homeless, hungry, cold and broke! Please help me this day. Amen.”

Lewis is relying on prayer because he says he can’t rely on spending even a single night in a New York City homeless shelter.

He’s from Manhattan but when he tried the shelter system he found himself transferred all over the city, to the outer edges of Queens and Brooklyn. He’d asked for Safe Haven housing that the city provides to individuals who won’t stay in shelters because of concerns about violence.

But he said he has yet to be observed by homeless aid workers on the street long enough to qualify.

“You have to be on the street a whole year,” he said. “That’s crazy. Now I got to suffer for a full year out here.”

Lewis’ aversion to shelters is pervasive among the so-called street homeless, according to a survey of 200 unsheltered individuals across New York City compiled by the Coalition for the Homeless and released Monday.

The survey, titled “View From The Street,” took place over several months in early 2018 with a follow up in January and February of this year, adding some pandemic perspective.

Written by Lindsey Davis, the Coalition’s senior director of crisis services, the report provides a candid window into a world that many New Yorkers see on a daily basis but do not always understand.

The Coalition found that 73% of those surveyed had been on the streets for at least a year, 66% had been diagnosed with or displayed mental health issues, and 43% had physical health conditions.

Three of four people questioned had spent some time in shelters, with 38% saying the main reason they left was their concerns about personal safety — a topic THE CITY has reported on extensively. About 25% said they had difficulties with rules and procedures.

Some of those surveyed wouldn’t say where they go at night. But of the 177 who did, only 11% said they would bed down in shelters or drop-in centers when temperatures fall.

Most — 62% — said they relied on the transit system instead, a strategy complicated by the pandemic-spurred overnight shutdown for cleaning.

“Shelters are considered by many homeless individuals as providing an unacceptably low level of personal security,” the report states. “The incidence of theft, physical attack, or other types of violations in the shelters — whether experienced, witnessed, or simply rumored — clearly contributes to the perception of the shelter system as chaotic and unsafe.”

The vast majority of those interviewed were single adults, and most had been in New York on average 30 years. More than a third — 36% — were born here, and 42% were once rent-paying tenants who fell on financial difficulties that led to eviction.

‘Behind The Bronx Zoo’

The Coalition field workers who did the survey chronicled the habits and survival skills of the unsheltered, finding them in typical places, including hubs like Penn Station and the Port Authority, and on church steps huddled in cardboard boxes or bedded down in ATM vestibules.

Then there were the more unusual spots: a balcony in a public housing development; on the street near a police station; in a small park “where a few of us look out for each other;” and in the woods “behind the Bronx Zoo.”

Those surveyed included Whitney, a bipolar woman with multiple sclerosis who said she’s “nearly 60” and needs a walker to get around.

“She’s tried the shelters but fears for her safety: Her disability makes her a target, she doesn’t feel staff are looking out for her and the environment of all the shelters she’s tried has been too chaotic, especially when she isn’t feeling her best,” according to the report.

Marte, in his 70s, is a former building porter who lost his job years ago and was never able to get back on his feet. He rides the subway constantly and has “learned to strategically hide his belongings under his subway seat and avoid discussing what few things he has with anyone.”

He still carries his pass from the United Nations, where he was employed decades ago, and hasn’t been back to his homeland, Indonesia, in 45 years. He assumes his parents are dead.

Then there’s Jeff, 60, who spends his days sitting on an upturned paint bucket in a corner of the Port Authority Bus Terminal. He said he knows vendors and commuters by name, and many stop to chat and give him food. He has a bad case of edema that he struggles to treat, making it difficult for him to walk.

“He explained that he tries not to engage with systems, including police, outreach officers, shelters or other social service agencies in the city — believing that help can be offered in a more respectful and professional way than he has experienced,” the report states.

The Coalition also found that 84% of those surveyed had been approached at least once — and sometimes repeatedly — by outreach workers hired by the city and shelter providers.

The Coalition’s surveyors noted several problems with the outreach approach — starting with teams of NYPD officers accompanying some workers in their rounds. The presence of cops, the report stated, can “dissuade those staying outdoors from engaging with these workers or sharing personal information.”

They also noted a phenomenon THE CITY has documented: Homeless individuals are given confusing and at times contradictory information about the protocol for attaining official “street homeless status” that Anthony Lewis described to qualify for Safe Haven apartments.

The report stated that shelter security problems are compounded by inadequate and poorly trained staff, along with a convoluted bureaucracy that sends residents from shelter to shelter, and makes the path to housing confusing and arduous.

The report contends that there are, for example, not enough Safe Haven beds. As of February there were 20 Safe Havens with 1,232 beds, a major improvement over past years. Four years ago there were just 675 beds.

But according to the HOPE count, a census of people sleeping on the street, 3,857 individuals were encountered on a frigid night in January 2020. Some 58,000 people currently sleep in homeless shelters.

“Nearly every night of the year, all of the Safe Haven facilities in the city are filled to capacity,” the report states, noting that only 2.6% of those surveyed said they’d been offered a Safe Haven bed.