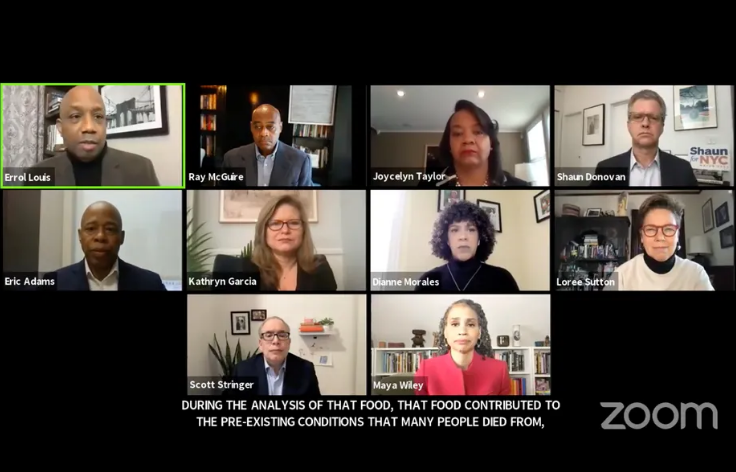 Get ready for a slew of polling data from academic institutions, private polling groups, consultants and political campaigns themselves. What does it all mean — and which numbers can you trust, especially with ranked choice voting in play?

Looking at the handful of polls that have come out so far in New York City’s mayoral race, you could be justified in thinking the contest has a frontrunner.

But keep three things in mind: There’s a long way to go in the race, ranked choice voting is being used for the first time — and not all polls are created equal.

“Unless somebody really pulls away with this, it’s going to be pure luck to see a poll that is able to extrapolate how the ranked choice voting is going to work itself out on election day,” said Spencer Kimball, politics professor and director of Emerson College Polling, where he studies survey methodology. “What it can tell you is who your top horses are.”

With less than three months to go until the June 22 primaries, New Yorkers are likely to soon see a lot of news on polling in the mayor’s race.

But what should we do with that information, and how does an interested voter know which numbers to trust and which to take with a grain of salt?

We spoke to a handful of experts to parse the issue. Here’s what you should know about how political polling works in New York City:

Where do the polls come from?

Usually, the polling data you see in the news comes from partnerships between media outlets and academic polling institutions — for example, the recent mayoral poll Kimball’s team at Emerson conducted with the local television station WPIX-11 and national cable network NewsNation.

That survey showed Andrew Yang in the lead, as he has been in three other public polls released as of late March.

In New York, many surveys on local issues come from nearby polling powerhouses at Marist College in Poughkeepsie, Siena College in Albany and Quinnipiac University in Hamden, Conn.

But those public-facing, academic polls only make up a small segment of the total number of surveys that will take place around the 2021 elections.

Political campaigns also pay big bucks — up to $30,000 for a high-quality poll — to hire private analysts and other number crunchers to collect their own data.

“Virtually no polls are released publicly,” said political consultant George Fontas, who worked with the company Core Decision Analytics to conduct a series of independent polls on the mayor’s race.

From time to time, however, a campaign will make internal data public “for their own strategic purposes,” he said.

The Yang camp made that move just last week, releasing internal poll numbers that touted his support among voters at 25%, giving him a double-digit lead over Brooklyn Borough President Eric Adams.

The campaign put out those figures the day after Fontas’ partnership — which is not affiliated with any candidate, he told THE CITY — had released a poll showing Yang’s support at just 16% while half of voters surveyed said they were undecided.

Polls are also conducted by for-profit and independent groups like Public Policy Polling or other third-party consultant groups, such as Fontas’ team. As with academic or internal polling, the experts say it’s always a good idea to check their credentials, independence and methodology before trusting their results.

How can I tell which polls to trust?

First, be aware of who conducted a poll and what their motives may be. Reputable academic institutions are usually reliable for at least being unbiased, Kimball said.

Polling by campaigns, on the other hand, can never be independent, even if it is often done by trained professionals.

“Generally speaking, a campaign has a clear agenda and you’ve got to be very careful of their polled material,” Kimball said.

Also keep an eye on the “margin of error,” he said. These details are usually found in a poll’s fine print with a “+/-” symbol. If it’s too high, and the race is close, it makes the results moot, he said.

For example: If you see a poll that says a candidate is leading 54% to 46% — with one candidate getting 54% of the vote and another getting 46% — but the margin of error is 5 percentage points, “that poll is really not significant,” Kimball said.

“Even though it looks like an eight-point lead, it’s really — you take five points off of the top and add five points to the bottom,” he said. Statistically, it’s a tie.

Fontas suggests looking at the total number of people surveyed, as well, to make sure the pollsters are getting a large enough sample size.

“You want to see how many people the poll polls, right? And for citywide elections, you want at least 800 people,” he said.

Another important consideration is whether those people “closely enough mirror the electorate” on race, gender, age and other factors, Fontas noted. For example, he said, a poll where respondents are 95% white would be a red flag in New York City where census data shows 57% of people are non-white.

But not all demographic patterns are so easy to spot.

For example: A poll of the Democratic mayoral primary that has 60% female respondents may look skewed to an untrained eye. Yet in New York, Fontas says, that’s spot-on — because his research has found that 6 in 10 likely Democratic primary voters in New York are women.

How much polling will we see in the city’s other races?

Voters can expect to see a slew of polls in the mayor’s race, Kimball said. But there will be much less reliable, publicly released polling data about other races, like comptroller, or the borough presidents. Polling on individual City Council races is even less likely.

Kimball said that’s because those races don’t get as much attention, or news coverage, which equals publicity for the polling groups.

“There’s value to that for the institutions. When you start doing some down-ballot races that people aren’t following, you’re not going to get that type of coverage. And so it loses value,” he said. Polls can cost tens of thousands of dollars to produce.

Polling is expected to ramp up as the June 22 primaries near — and as campaigns start spending in earnest on advertising.

The experts noted that name recognition can influence results, especially early on in a contest. And the majority of would-be voters aren’t yet focused on the race, according to Kimball, who has often seen huge swings in voter support within the last six weeks of a local contest.

“Most people are like, ‘Where’s my COVID shot? Where’s my stimulus?’ You know, they have other thoughts, and they’re gonna say, ‘Yeah, I’ll worry about the election in June,’” he said.