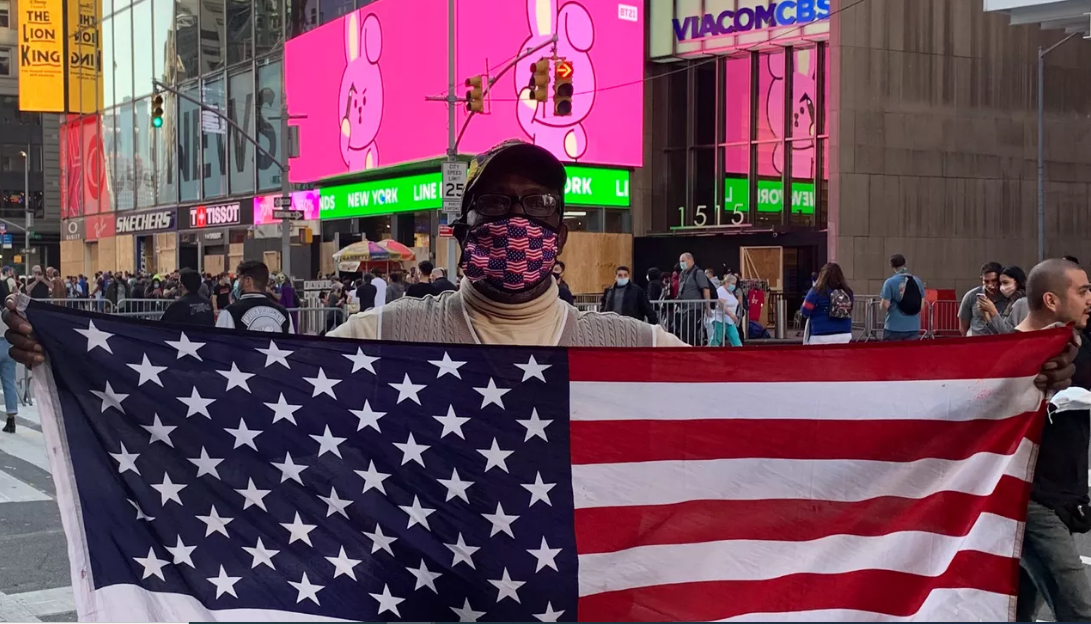 What ‘a Year Later’ Means for These New Yorkers

The reality of the coronavirus crisis sank in at very different moments for many across the city. Here are six New Yorkers’ recollections of when the pandemic began for them.

It’s the disaster without a date.

You could choose to mark the beginning of the COVID-19 crisis as the day the NBA shuttered, or when the World Health Organization declared it a global emergency. Or when the first case appeared in New York. Or the first local death.

To mark the start of the ongoing catastrophe that has taken the lives of nearly 30,000 New Yorkers, THE CITY spoke to people from various walks of life and asked them to recall when the pandemic began for them. When the enormity of it sunk in, when it became real — and what day or moment sticks out most.

Here are their stories:

Jackson, 68, had taken his yearly vacation with his wife to Mexico in late February, returning from his home in Westchester to his job selling souvenirs and apparel at 45th Street and Broadway in Times Square on March 4, a Wednesday.

“It’s March. Things are warming up and the city is bustling,” he recalled.

That whole week, things were busy, the weekend especially so, with seven Broadway shows running within a block of the stand he’s had since 1998, he said. Before the pandemic, between 70,000 and 80,000 people walked by his block on an average day, according to data from the Times Square Alliance.

But by Tuesday, March 10, the crowds had dried up, he said.

“It was just so rapid. It was like, all of a sudden, you had the spigot from a water hose coming out like crazy, with people with activity and all of that. And then the spigot was cut off,” he said.

Jackson did not return to Times Square until late April, and then only on weekends, which is his new normal schedule. On a good day before the pandemic, he says brought in $200 to $500.

In late February, DaBaron and the other shelter residents were watching TV when they saw news about a virus coming out of Wuhan, China, but it felt far away. And since American officials weren’t raising much alarm, he wasn’t too worried.

“But within a two-week period — oh, it hit America. And we in the shelter are like, ‘Wait a minute. Hold up. It’s here?’” DaBaron recalled.

“The emotion of fear that permeated through the entire facility — it could be seen on people’s faces. Our discussions were about it. And that was because we knew how rapid a virus can spread in a shelter system,” he said, noting the difficulty of social distancing.

“The flu, a cold — whatever goes around, a stomach virus, it travels,” he said. “So when we’re seeing this virus that’s literally killing people, and it’s spreading so fast, we’re like, ‘Holy s—t. I may die because of this.’”

The next few weeks in the shelter were chaotic. Everyone, including the staff, were scared and unsure about how to implement safety measures. Soap and sanitizer were hard to find, he said. Support services, like sobriety meetings, were cancelled.

“In this atmosphere of fear, substance use went up. Overdoses were rampant,” Da Baron said.

As the virus spread, men from city jails were transferred to DaBaron’s shelter — and he suspects some brought the virus with them. After a close encounter with one of the men from jail, DaBaron fell ill quickly. His case manager isolated him within the shelter, then sent him to a hotel in Astoria, Queens, to be quarantined.

“It’s a set-up like a medical facility,” he said. “Compared to being in a public shelter. I was like, ‘Whoa! Damn, this is good!’ And what I really, really, really appreciated was that I had nurses that came around every couple of hours.”

DaBaron’s condition got progressively worse over about three days. Medical staff hooked him up to an oxygen tank. His body started going cold, he remembered, and he had a hard time talking.

“My biggest fear is being buried in a potter’s field. I’ve been told all the time, ‘Who’s gonna pay for your funeral?’” he said. “And I’m thinking of those bodies, those mass graves.”

He started praying — and practicing breathing techniques he learned during yoga and meditation at The Recovery Center, a clinic for addiction help.

“As I’m there in that chair, I just said ‘Start breathing’ with the yoga stuff — six seconds in, four seconds out. I just started doing it,” he said.

Slowly, his oxygen levels improved to a less dangerous point. He stabilized, but it was weeks until his symptoms subsided.

DaBaron is grateful he got a second chance.

“It was gonna be immersive and interactive,” said Garcia.

The 31-year-old artist had “designed all these paintings to put on the walls and floors, and props as well. So you walk into this giant space with multiple rooms and stuff. And then you were able to like wear clothes and props to like, blend in the background. And it was a very social media type of thing. Really cool. So we worked on that for over three months,” she said.

A week ahead of the opening, the team was getting progressively more anxious, she said. With two days to go, the team invited media for a preview and only half showed up.

“It was slow and weird — kind of like when a movie goes wrong,” Garcia said.

Like many New Yorkers, she was watching TV when she heard the lockdown news.

“Everyone had to be home,” she said. “And then it never opened. The installation remained,  untouched for months — maybe six months. And then the space had to close. So we had to go and actually clean up everything. There was a hope that it would open and then, nope. It got removed.”

Because she works with costumes and garments, Garcia spent much of the early part of lockdown making masks for health workers.

“You’re just home and watching the news. And you’re like, I want to help as much as I can. And I have a sewing machine.”

She sewed more than 400 masks, giving them directly to nurses and doctors who contacted her through Instagram.

Levy, a native of Australia, said it was early February when the virus “started to really penetrate my consciousness.” Levy previously worked in the airline industry, and former colleagues began reporting an uptick in flight cancellations in and out of Asia, and from Europe to the United States.

“I started to worry a little bit about what it would mean for Broadway. But I just assumed we’d have to manage some small, minor hits to demand from certain regions, like China,” he said.

“It’s funny, I have a bunch of text messages from the middle of February with one of my colleagues where we say ‘We should really add coronavirus to our meeting agenda.’ And we never really did,” he said. “It never even occurred to me that it was going to be the singular historic event that it’s been.”

During rehearsals and show previews, Levy and the staff were “totally distracted by the day-to-day.” Then, in early March, a colleague involved with a “long-running tourist hit” on Broadway told Levy audiences were beginning to thin out — an oddity for his show that rarely had spare tickets.

“Suddenly, there were pockets of empty seats everywhere,” Levy said. “He also horrifyingly reported that some audience members had requested to be moved away from anyone who looked Asian. That’s when it started to hit me, really,” he said.

By the week of the planned opening, the staff at the Brooks Atkinson Theatre had implemented coronavirus safety protocols like hand sanitizers, gloves, and “single-use pens at the stage door.”

Levy texted a friend working in Myanmar as an infectious disease specialist.

“I wrote to him and said ‘Is everyone overreacting?’ or something like that, and he wrote back: ‘Please be careful. This is likely to decimate your industry for the next few months at least, possibly years,’” he said

“Not what I expected to hear. And we were due to open at the end of that week, on March 12.”

On March 11, an usher who had briefly worked at the Atkinson as a line organizer tested positive for the virus.

“Everything was a little dark. When we finally heard the governor’s announcement, I think I can safely say we all saw it coming, even if it was just by a few hours,” Levy said. “We canceled the opening. We canceled the party. We told everyone to stay home.”

When Sherman and her four roommates — previously all strangers to each other — got word from their various offices that they would be working remotely, they had to get used to seeing a lot more of each other.

“We kind of had to reformat our apartment to be a WeWork with five people … and then try to find some semblance of life in the evenings,” she said. “The music really helped with that.”

The roommates had some large speakers from a rooftop concert the summer before, and decided to play music during the nightly 7 p.m. applause for health care workers during the early weeks of the pandemic.

It became a mini tradition for the area near Stuyvesant Town. Neighbors got into it. The event had its own hashtag, and a Spotify playlist.

“We would get notes left for us hanging on the door with requests, and signs to hold up for someone’s birthday,” Sherman, 34, said. “There was a woman, Carol, who would drop off a six-pack every Sunday in our elevator. There was a nice sense of unity from it.”

The group stopped when the Black Lives Matter marches began in late spring. They continued to clap for essential workers, but felt “playing an upbeat song to spread joy throughout the neighborhood wasn’t exactly the vibe of New York City in that moment.”

Now, she and her roommates aren’t quite sure how to mark a year since the first song played. They originally planned to play an ending song — when they thought the crisis would only last “a month or two.”

“We haven’t agreed upon anything,” she said. “We find it to be challenging because it’s not over.”

“I met at Jing Fong restaurant in Chinatown with the owner, several other restauranteurs in the neighborhood and some advocates to talk about restaurant industry issues, and how Chinatown restaurants were already being hit and losing business to the pandemic, even though it hadn’t arrived in New York City yet,” he said.

“At that time, the directive was: ‘Go support local restaurants. Go support small businesses, particularly in Chinatown,’” he said.

“At that time, I think it would have been impossible to really conceptualize the scope of the crisis.”

In early March, Rigie, 38, flew to Seattle — where the first reported case of the virus in the U.S. appeared — for a hospitality conference. He returned to New York on March 3.

“I got back and that’s when there started being a lot of uncertainty,” he said. “Then on March 12, the governor announced that restaurants would have to reduce occupancy to 50% starting on Friday, March 13. And that’s when all hell broke loose.”

“I remember my wife, daughter and I went for our last indoor meal at 50% at Crave Fishbar on the Upper West Side. And speaking with Brian, the owner, he was just like, ‘What’s going on?’ And I was like ‘We have no idea. But let’s just hope that, you know, this is going to be a couple of weeks, and then we’ll be able to reopen,’” he recalled.

“And here we are, one year later.”