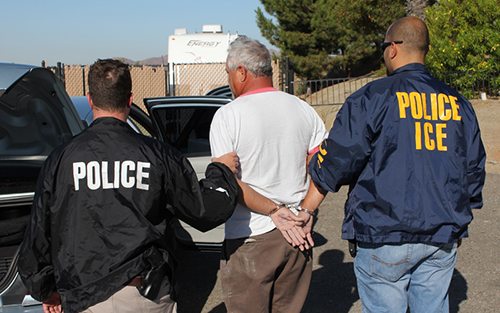 Days after President Joe Biden’s inauguration, immigration advocates in Washington state rejoiced at his announcement that he would honor his campaign promise and issue a 100-day moratorium on deportations, while increasing the urgency around immigration reform.

“We’ve just been informed that next week’s regularly scheduled ICE flight has been cancelled,” read a message posted on Facebook by the Yakima Immigrant Response Network, an activist group that watches over people deported from Eastern Washington.

The cancellation of the flight marked “the beginning of a new era,” the group declared on Facebook shortly after Biden’s announcement.

But in a signal of the many challenges the new administration is sure to face, a Texas judge temporarily blocked Biden’s moratorium just days later. On Tuesday morning, a deportation flight is once again scheduled to arrive in Yakima, traveling from Las Vegas before heading to the southern border.

The Biden administration’s immigration agenda is already giving immigrants across the country a sense of hope. But many also acknowledge the tough road ahead.

The White House has signed a flurry of executive orders, including repealing the Trump administration’s so-called Muslim ban, halting construction of the border wall and stopping new enrollments in the “Remain in Mexico” policy, which required asylum seekers to wait in Mexico while their immigration cases proceeded.

“I’m concerned that some people are sort of thinking like, ‘Oh, well, you know, look, Biden came in and he’s doing all these things, and everything. It’s all good now.’  And I don’t see that as the case,” said Jorge Barón, executive director of the Northwest Immigrant Rights Project.

There is a record low number of immigrants in detention — approximately 14,000 across the country —  due in part to the pandemic. But Barón believes that thinking around immigration needs to change in order to prevent those numbers from going back up.

“It’s not about reversing everything the previous administration did; it’s about doing the right thing,” said Dr. Raul Garcia, a 49-year-old Republican doctor from Yakima who ran for governor but lost in the primary last August. Garcia’s family, originally from Cuba, received political asylum.

In addition to the presidential actions above, Biden signed several executive orders on Tuesday. One established a task force to reunify migrant families separated at the border under the Trump administration’s “zero tolerance” policy. Another order included an immediate review of the so-called public charge rule, a policy that sought to deny green cards to immigrants who use, or are likely to use, public benefits, such as food stamps and Medicaid. A third required the government to address the root causes of migration, examine the “Remain in Mexico” policy and other asylum restrictions that have left thousands waiting at the southern border.

Other items on the Biden immigration agenda will require negotiations with Congress and will take longer to implement. Probably at the top of that list is Biden’s plan to offer a pathway to citizenship for 11 million undocumented immigrants,  including children who arrived with their parents and are recipients of the Deferred Action for Childhood Arrivals, or DACA, program. Advocates and Democratic leaders expect this debate to be thorny, in part because Democrats have only razor-thin majorities in both the House and Senate.

Presidents George W. Bush and Barack Obama both attempted to pass comprehensive immigration reform but did not find the support they needed from Congress.

Still, some advocates are hopeful the U.S. has experienced a significant enough cultural shift since then that lawmakers will be more eager to act, especially since polling shows a majority of people favor immigration reform that includes a pathway to citizenship.

“We are in a situation where there’s unprecedented levels of support for immigration and the immigrant-rights movement. It’s been bigger than ever,” said Kamau Chege, director of the Washington Community Alliance. “In part because, you know, folks like me and my friends have taken a lot of risks sharing our stories … and doing the work it takes to change hearts and minds.”

As a DACA recipient, Chege said Biden’s immigration proposal to create a pathway for citizenship for people like him would allow them to plan for the future.

“There’s almost a million young people like me living in two-year increments,” Chege said, referring to the two-year work permit DACA recipients receive. “You just can’t plan that way. There’s no career planning in a serious way when your ability to work and stay in the country has a countdown clock of 24 months.”

Immigration is not just a priority for Democrats. Garcia also believes the Biden administration has an opportunity to make history with regard to immigration policy.

Referring to the hundreds of thousands of undocumented people who live in the Pacific Northwest who might finally gain citizenship, Garcia said: “They have been as American as they can be.”

“I would walk very carefully on the line of not deporting criminals,” Garcia said. “You can go be a criminal in your own country.”

Aneelah Afzali, executive director of the American Muslim Empowerment Network at the Muslim Association of Puget Sound, said that in terms of Muslim communities, repealing the ban on travel from 13 countries with substantial Muslim populations came as “a huge relief.”

“Everybody was celebrating,” Afzali said, “while at the same time recognizing that it is not enough.” She said there are still potentially thousands of Muslim families who remain separated by the travel ban. By passing the “NO BAN Act,” Congress should ensure no future president is able to reenact such a law, Afzali said. The NO BAN Act is a piece of legislation first introduced in Congress in 2019.

The problem of Islamophobia, which the travel ban helped flourish, will be a tougher problem to solve, Afzali said. She pointed to the high rate of hate crimes and school bullying as examples of anti-Muslim sentiment in the region.

“The narrative needs to change about how we speak about marginalized communities in general, including American Muslims,” Afzali said. The real threat, she said, is white supremacy.

On the foreign policy front, Afzali said she hopes the new administration will move away from antagonizing Muslim majority countries, such as Iran.

Some Washington state advocates are not waiting for the Biden administration to act. Maru Mora Villalpando, a member of the group La Resistencia, is focused on ensuring that legislation to ban private prisons in Washington state becomes a reality.

First introduced last year, the bill aims to prevent private companies that contract with local, state and federal agencies, such as Immigration and Customs Enforcement from operating in Washington state. Under the bill, Washington state’s one private detention facility, the Northwest ICE Processing Center in Tacoma, would continue to detain people only for the duration of its contract, which expires in 2025. The facility is run by the GEO Group, one of the biggest private prison companies in the country,

Although the Biden administration has directed the Department of Justice not to renew its contracts with private prisons, the executive order does not pertain to facilities under the Department of Homeland Security, including ICE.

Barón, for his part, said he’s anxiously anticipating the new administration’s reexamination of the public charge rule because of its chilling impact on immigrants who need services.

“I’ve heard all kinds of stories from people and reports about people, you know, deciding not to go to breast cancer screening because of the public charge rule,” Barón said, adding that the fear of attaining medical services extended to COVID-19 testing. “For every person who came and asked us, there are probably multiple people who never asked the question and just decided not to apply.”