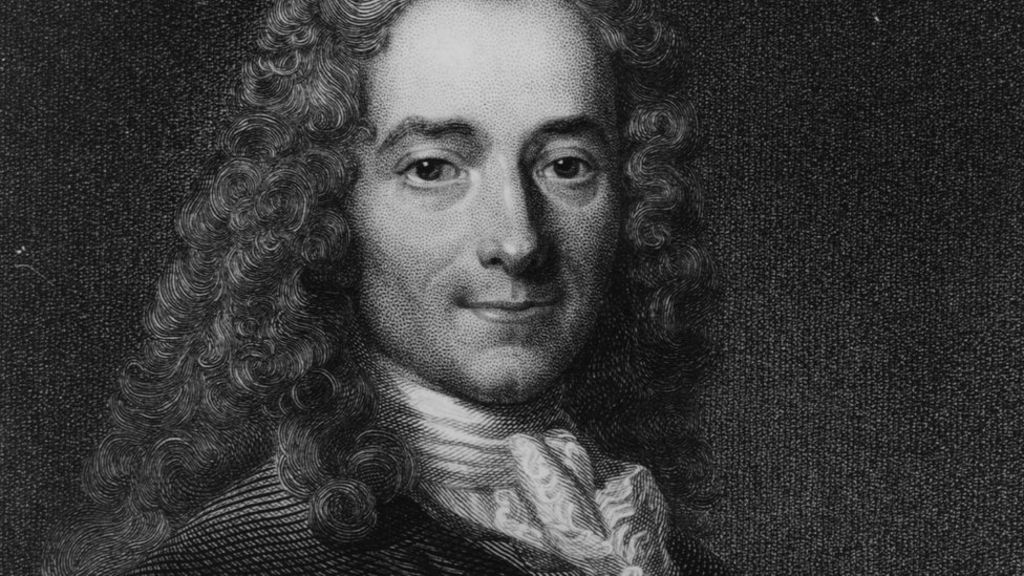 “Italy had its renaissance, Germany its reformation, France had Voltaire”, the historian Will Durant once commented.

Born François-Marie Arouet, Voltaire (1694-1778) was known in his lifetime as the “patriarch” of the French enlightenment. A man of extraordinary energy and abilities, he produced some 100 volumes of poetry, fiction, theatre, biblical and literary criticism, history and philosophy.

Among his myriad works, Voltaire’s Candide, or Optimism (1759) is widely recognised as the masterpiece. A darkly satirical novella taking aim at human folly, pride and excessive faith in reason’s ability to plumb the deepest metaphysical truths, it remains as telling in this era of pandemics and wild conspiracy theories as when first published.

In his earlier works Voltaire had propounded an almost naive optimism, but the decade from 1749-1759 was not easy for the philosopher-author.

In 1755, meanwhile, on November 1, a huge earthquake had struck the Portugese capital, Lisbon, followed by a tsunami. Within minutes, tens of thousands were dead.Personally, his great love, Émilie du Châtelet had died in 1749. Politically, he had been forced from exile to exile for his criticism of monastic and clerical privileges in France and his Essay on Universal History, the Manners, and Spirit of Nations (1756), which treated Christianity as just one world religion, rather than the final revealed truth.

The recriminations soon began. Protestants saw in Lisbon’s destruction divine judgement on Catholicism. Catholics proposed, with equal implausibility, the especial sinfulness of the Lisbonites as the disaster’s cause. Pyres were erected in the streets to burn heretics, as scapegoats for the disaster.

This combination of senseless death and even more senseless human responses outraged Voltaire. His first response was the impassioned “Poem on the Lisbon Disaster” of 1755:

As his name suggests, Voltaire’s hero, Candide, is a simple lad. Raised in a magnificent castle in Westphalia, in North-Western Germany, he is moved by just two passions. The first is abiding love for his sweetheart, Cunégonde.

The second is admiration for his teacher, Pangloss (“all tongue”), an exalted Professor of “métaphysico-théologo-cosmolonigologie” possessed of the happy ability to explain everything that happens, despite appearances, as “for the best”.

These two men had defended what the former called “theodicy”: the idea that a perfect God could only have created the best possible world. Hence, the human perception that events like pandemics, earthquakes, massacres and tsunamis are bad must be mistaken.

Candide’s fate is set up by Voltaire as a reductio ad absurdum (reduction to absurdity) of this optimistic theory. Our hero is first expelled from his Edenic childhood garden, when Cunégonde’s father comes upon she and Candide illicitly experimenting in what Voltaire delicately calls “natural philosophy”.

In Candide’s ensuing wanderings around Europe and the Americas, Voltaire treats his hero to a veritable guided tour of all of the evils of war, lust, avarice, vanity and colonialism.

Fleeing war, rapine and zealotry in Bulgaria and Holland, Candide arrives in Lisbon just in time for the earthquake. He is selected for execution by fire as a heretic, before escaping to save Cunégonde from disputing, lustful representatives of the West’s two great biblical faiths, Judaism and Christianity.

The lovers flee together to the Americas. In Buenos Aires, however, the Spanish governor seizes Cunégonde for his wife. Candide and his servant, Cacambo, are forced to flee through yet more bloody misadventures in the new world.

In a rightly famous passage, which finally sees Candide recant of his teacher Pangloss’ theodicy as the “abomination […] of maintaining that everything is right when it is wrong”, they come upon a crippled African slave whose masters are Dutch merchants in Surinam:”

Soon enough, Candide also hears news that Cunégonde is now a slave in Turkey, after her own litany of unlikely sufferings. So, he hits the road one last time. Reunited at last with his half-broken beloved, they retire to a little farm with their friends near Constantinople.To this Europe, the increasingly disillusioned Candide returns. The riches he acquired in the new world are soon fleeced by cunning social climbers in Paris and Venice. He is reunited with Pangloss, who has recanted nothing of his optimism, despite being enslaved, flogged, hanged and brutally maimed, explaining that “I am a philosopher and I cannot retract […]”

Here, despite everything, Pangloss still sometimes comes to mindlessly philosophise, as the story famously closes:

In the entry on “wit” (esprit) in his famous Philosophical Dictionary of 1764, Voltaire reflects that it is:

It is the art of Voltaire’s Candide to leave readers unsure whether they should be weeping, screaming, laughing or all at the same time. Atrocious sufferings are recounted with the innocence of a children’s fairy tale.

Elevated questions of metaphysical philosophy, which for a century had divided the greatest Western minds, are brought crashing down to earth amid the clamours of warring armies, collapsing cities, inhumane barbarism and slavery.

It is easy to see why critics have read Voltaire’s novella as a document written in despair. But the laughter of the book suggests this is only half the story.

Voltaire is enraged at human cruelty and idiocy. He scorns the Panglossian pride, which pretends to justify the unjustifiable with blithe self-assurance and vain sophistries. He despises any theory clever enough to explain away human suffering, but not humane enough to decry it.

But this is because he believes human beings can be better. For Voltaire, we can and should challenge all fair-sounding ideologies reconciling us to indignities visited on others we would not accept for ourselves.

His Treatise of Toleration of 1763, was sparked by anger at the wrongful execution of Protestant Jean Calas by Catholic zealots in Toulouse.

In 1778, the legendary author and advocate for multi-faith society finally returned to Paris, to be hailed as a hero. Fatigued by the journey, Voltaire died soon after, claiming: “I die adoring God, loving my friends, not hating my enemies, and detesting superstition.”

In 1791, the revolutionary government honoured Voltaire as an inspiration. His remains were re-interred in the Pantheon.

But there are few other books you could read with greater sympathy in 2021 than this little gem of irony, calamity, and restrained outrage at human folly and prejudice. And none that are more cutting and entertaining.