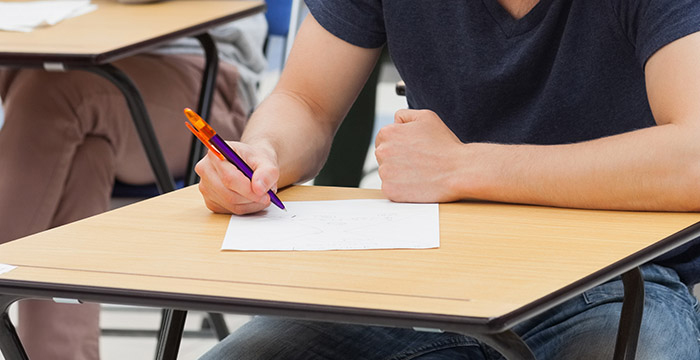 Chicago Public Schools will streamline its high-stakes high school application process next year, replacing a spring test and its selective-enrollment exam with one high school assessment for choice programs that all students will take during the school day.

The district also said it also plans to do away with minimum test score requirements, which student advocates have said unfairly blocked some vulnerable students from even applying to specialized programs that might be a good fit for them.

The announcement came Thursday just an hour before the district and union announced the two sides had reached a tentative agreement to reopen high schools for the first time in more than a year. If the deal passes a full union vote, students can return as planned beginning Monday.

Chicago Public Schools also said it will promote all elementary students to the next grade in the fall and again suspend any update to its controversial school ratings, still relying instead on the 2019 measures. It will hit pause, too, on the spring administration of the NWEA’s MAP test that is given at elementary and middle schools; it will continue to administer the state assessment as required.

District officials, who must seek school board approval for the proposed suspension of ratings another year, said in a letter to families that the changes are a nod to the pandemic’s profound disruption to learning and an effort to respond to that.

Families and advocates had called on the district to spell out a high school application process for next year that would help account for the uneven impact of the pandemic and school closures. The upheaval has tended to be more disruptive for students with special needs and those living in hard hit, predominantly Latino and Black neighborhoods of the city, threatening to worsen their odds of getting into coveted programs next year and beyond.

It’s yet to be seen whether advocates will find the district’s testing changes go far enough. The district’s letter did not address, for instance, whether grades will factor any differently into the admissions equation next year: Black and Latino students so far this year have seen a more significant increase in Ds and Fs compared with their white and Asian peers.

The district said starting next fall, it will use one exam, the CPS High School Admissions Test. Every district student will take the test during the school day, while students at charter and private schools will have an opportunity to take it on the weekend. The change, the district’s letter said, will “promote equity by providing all students access to the test during school hours.”

The district’s decision to cancel the NWEA’s MAP test this spring means it will have no measure of student growth to factor into its school quality ratings. That means the district will stick with the 2019 ratings for the third year. The district recently kicked off a formal process to review and overhaul its ratings system, which critics say has served to drive families away from schools in historically under-resourced neighborhoods of the city.

This article was originally posted on Under pressure from pandemic, Chicago lays out changes to competitive high school admissions process