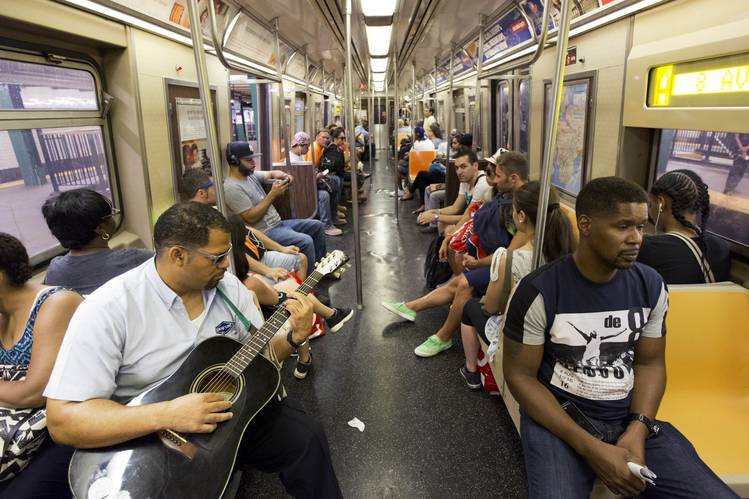 The largest union for transit workers is challenging the MTA’s plan to keep the C and F subway lines at pandemic levels of service.

Officials from Transport Workers Union Local 100 are going before an arbitrator Wednesday morning to try to hit the brakes on service reductions to the two lines that have been in place over much of the past year.

“We believe it imperils the health and safety of our employees,” Eric Loegel, a vice president for TWU Local 100 told THE CITY. “You run fewer trains, you have a greater likelihood of crowding occurring onboard trains and people are going to have fewer opportunities to social distance.”

Early in the pandemic, the MTA cut service on all subway lines — and suspended some, including the C, for several weeks or months — as ridership plummeted and as thousands of transit workers quarantined or were out sick.

Illness, retirements and a shortage of new hires among train operators and conductors have also cut into service frequency, THE CITY reported last month, with more than 4,200 one-way trips canceled in December alone.

The union contends the MTA could instead scatter service reductions among other lines at a time when weekday subway ridership is at around 1.5 million — down nearly 70% from last February.

Loegel said the F, which extends across three boroughs between Jamaica, Queens, and Coney Island, Brooklyn, is getting “a bullet in the knee” from reduced service levels.

“They want customers to use the system again, they’re saying, ‘Please come back,’” he said. “But at the same time, they’re doubling down on a reduction and baking it into the schedules.”

He’s also worried other reductions could be coming down the line.

Ken Lovett, an MTA spokesperson, said there are no changes to the schedules from the ones put in place last year, when the time between trains on the C and F lines went up between 30 seconds and four minutes, depending on the time of day.

He added that the lines have not yet returned to full service because ridership “remains very low.”

“These changes resulted in millions of dollars in savings during our ongoing financial crisis,” Lovett said. “We will continue to prioritize changes like this based on ridership to help avoid layoffs of our workforce and much more draconian cuts to service.”

The MTA has said a $4 billion infusion of federal aid will allow the agency to get through 2021 without “devastating service cuts” and layoffs of thousands of workers.

‘Not Going to Stay Empty Forever’

Some MTA board members have raised the possibility of reducing subway service to adjust to changing demands. The agency last month cut service on the Long Island Rail Road, saying it was a “rightsizing” move to meet significantly lower ridership levels.

“With the way things are right now, you don’t have that much need for as many trains as there used to be,” said Juan Perez, 41, who was waiting Tuesday morning for an F train into Manhattan at the 21st Street-Queensbridge station. “But you can’t have that when more people come back to the subway.”

Jessica Pesantes, who takes the F train from Queens into her job at a Midtown hotel, said she has noticed more crowding on the line in recent weeks.

“We need these trains,” said Pesantes, 49. “And they’re not going to stay this empty forever.”