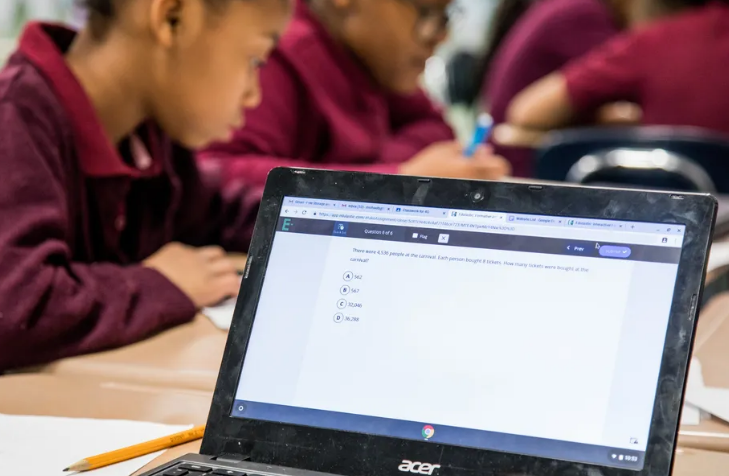 School leaders at Thea Bowman Leadership Academy are dreaming about offering everything from daily small-group tutoring sessions to safer classrooms next year as they start to address the instruction students missed during the pandemic. And, this time, they have the resources to make it happen.

The Indiana charter school is expected to receive more than $14,000 per student from the country’s third stimulus package — the most of any school in the state.

Schools serving high-poverty students, among the campuses hardest hit by COVID-19, will receive the most per student in federal relief. In Indiana, the top five districts and charter schools expected to get the most money per student — and many others high on that list — are in Gary, where de-industrialization has caused economic decline, population loss, and neglect. For some schools, the federal money could essentially double their typical annual state funding.

For Thea Bowman, a Phalen Leadership Academies school in Gary, the stimulus funds are even more of a boon. The school usually receives around $7,000 per student in state funding. The unprecedented boost in federal money prompted the charter network to solicit ideas for how to spend it from students, teachers, and families.

“It’s a massive influx of funds for our schools and for our [students] and obviously we want to use it to have the biggest impact we can,” said CEO and founder of the Phalen charter network, Earl Martin Phalen. “We’re incredibly excited.”

Nationwide, $130 billion will be directed to K-12 schools under President Biden’s American Rescue Plan. Indiana will receive $1.8 billion for schools, most of which will be allocated to districts and charters based on a measure of poverty. On average, the package will send $2,500 per student to schools, but around 90 public districts and charter networks in Indiana are expected to receive more.

This comes on the heels of two other federal stimulus packages, which helped districts cover the unexpected costs such as purchasing devices and internet hotspots caused by the sudden switch to remote learning.

Most Indiana schools have not yet finalized their spending plans. There’s more flexibility this round, allowing schools to spend on mental health services, cleaning supplies, summer programs, education technology, and building improvements that reduce the risk of COVID-19 exposure. However, at least 20% of the money must be used to address learning loss.

Gary Community Schools, which serves a city with one of the highest poverty rates in the state, is set to receive $9,814 per student. The district will prioritize providing additional enrichment activities and improving facilities, Emergency Manager Paige McNulty said in an email.

Also on the list of priorities are summer programs and restorative justice training for staff in partnership with the Gary Police Department. Final plans will need to be approved by the state, which took control of the district in 2017.

Aspire Charter Academy, which is also in Gary, is set to receive $13,216 per student — $5,000 more per student than it received from the state for 2019-20. The school declined an interview, but said in a statement it would use the money to address “immediate needs,” then focus on supporting staff and implementing programs to address any learning loss.

Another network school, The James & Rosemary Phalen Leadership Academy in Indianapolis, is also among the biggest beneficiaries in the state, expected to receive $8,971 per student. Phalen said that could help support the school’s free workforce development program for adults, which launched earlier this year in response to the spike in unemployment caused by the pandemic.

Final decisions won’t be made for 60 to 90 days, as schools continue to gather opinions from their communities. But even with all of the added support, Phalen said it could take years to get students back on track with their learning. He hopes that with this one-time stream of federal cash, schools will prove that they can improve student outcomes when given additional money, bolstering any future demands for more funding.

“What a blessing to have such an infusion of resources,” Phalen said. “To have the ability to do the things we dream of doing with our students and staff.”

View the list of total distribution amounts for each school below or here.