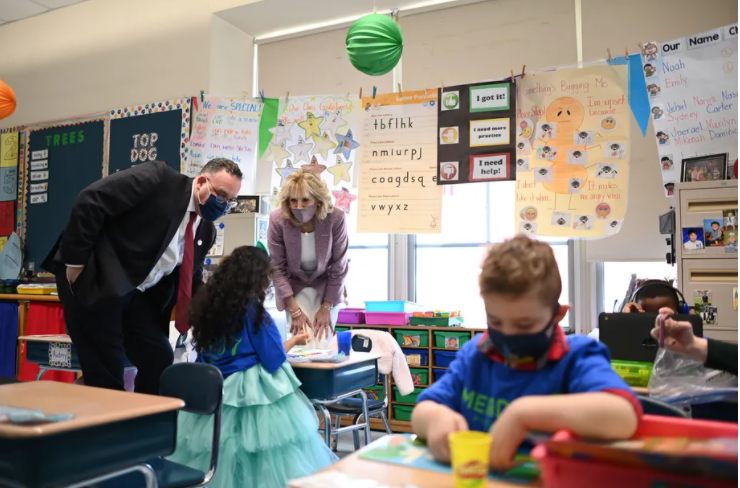 The federal government finally has data on schooling during COVID. Here are 3 key takeaways.

The federal government has released its first, long-awaited snapshot of schooling during the pandemic.

A newly released federal survey shows that a huge swath of American school children — particularly students of color — were still learning remotely in January. Of those students, a small but substantial share were getting little or no live instruction from a teacher.

The information was collected as part of President Biden’s push to get more schools reopened for in-person learning. The Trump administration had rejected the idea of such national recordkeeping.

The survey questions were given to a representative set of schools in 44 states serving either fourth or eighth grade. The data will be updated monthly through July.

In the months since schools answered these questions, more school buildings have opened as COVID case rates have fallen. A more recent estimate suggests that 80% of students now have access to in-person instruction.

But the federal survey highlights two major, continuing challenges facing school officials: the fact that tens of millions of students have received virtual instruction for months, and have missed out on learning and crucial support, and the continued reluctance of some families to return for in-person instruction, even when it’s available.

“We have a huge and long road of recovery and restoring instructional support to students,” said Betheny Gross, a researcher with the Center on Reinventing Public Education.

Here are a few takeaways from the survey.

As of early this year, most U.S. schools were offering some amount of in-person learning, according to the survey. A bit less than half of elementary and middle schools allowed students to return full-time, while about a third offered a hybrid schedule. That left about a quarter of schools that were exclusively remote.

But the share of students learning remotely in January was notably higher: 43% of fourth graders, and 48% of eighth graders. That reflects a pattern evident all year: even when buildings reopen, a distinct minority of families keep their kids home. In some large urban districts, the share has been larger: just one in four eligible Chicago elementary and middle school students returned for in-person instruction; in New York City, about 70% of students have opted for fully remote instruction.

That could be a crucial lesson for schools that are trying to get most or all of their students back by next school year. It’s not enough to just reopen their doors — they also need to convince families that it’s safe.

“Your messaging is going to be extremely important,” said Jonathan Collins, a Brown University professor who has conducted his own surveys on schools and COVID. He recommended schools highlight the safety precautions they have in place, including protections for teachers. “A lot of people are extremely worried about teachers being placed in vulnerable positions.”

2. There are big differences by race between the students learning in-person and those who remain remote.

This has been true since the start of the school year, according to a number of surveys, and now the federal data bears it out, too. While only 27% of white fourth graders were learning fully virtually in January, that was true of 68% of Asian students, 58% of Black students, and 56% of Hispanic students.

“The disparity between kids of color and white kids is just astonishing,” said Gross, who has also conducted research on school reopening trends.

What explains these gaps? A combination of which districts have reopened buildings and parents’ preferences, which reflect concerns about safety and longstanding distrust in schools that have fallen short in communities of color.

Regardless of the reason, the disparities are a big deal, as racial gaps in academic outcomes may well have grown as some students experienced in-person instruction while others didn’t. Research and surveys suggest that students do better academically in person.

Also of note: About 42% of students with disabilities were learning in person full time, and another 17% were on a hybrid schedule. That’s slightly higher than the figures for all students, though still concerning, said Gross.

“We knew last spring that when we shut the schools, those kids suffered tremendously,” she said. “It was really clear that providing access to those services and supports in a remote setting was going to be really, really challenging.”

3. Some remote students are getting little live instruction.

Ten percent of eighth graders learning remotely were getting no live instruction from a teacher at all, according to the survey. Another 6% received less than an hour of live instruction a day.

These figures suggest lots of students’ experience this year doesn’t resemble typical schooling at all. They may also be underestimates, since the figures come from school officials, and they don’t capture students who have disengaged altogether.

These results offer a stark reminder of the likely academic costs of remote instruction, which for many students has lasted more than a year.

The implications “could be tremendous for learning,” said Gross. “There is a potential for school systems to be starting next school year with vast dispersion of where students are in their academic progress.”

Meanwhile, parents are becoming increasingly concerned about learning loss, other data show. Collins said that his survey found that this is especially true among parents who are also wary of opening school buildings — perhaps because they have seen their child falling behind at home.

This article was originally posted on The federal government finally has data on schooling during COVID. Here are 3 key takeaways.