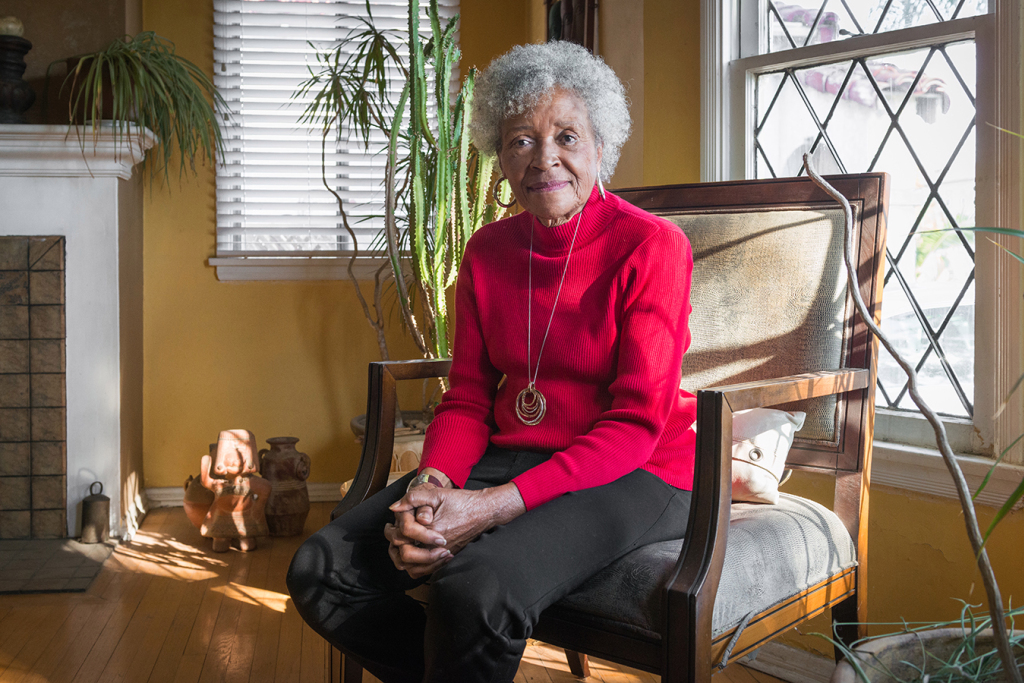 “It’s ‘Oh, Tuskegee, Tuskegee, Tuskegee,’ and it’s mentioned every single time,” said Karen Lincoln, a professor of social work at the University of Southern California and founder of Advocates for African American Elders. “We make these assumptions that it’s Tuskegee. We don’t ask people.”

When she asks Black seniors in Los Angeles about the vaccine, Tuskegee rarely comes up. People in the community talk about contemporary racism and barriers to health care, she said, while it seems to be mainly academics and officials who are preoccupied with the history of Tuskegee.

“It’s a scapegoat,” Lincoln said. “It’s an excuse. If you continue to use it as a way of explaining why many African Americans are hesitant, it almost absolves you of having to learn more, do more, involve other people — admit that racism is actually a thing today.”

It’s the health inequities of today that Maxine Toler, 72, hears about when she asks her friends and neighbors in Los Angeles what they think about the vaccine. As president of her city’s senior advocacy council and her neighborhood block club, Toler said she and most of the other Black seniors she talks with want the vaccine but are having trouble getting it. And that alone sows mistrust, she said.

Toler said the Black people she knows who don’t want the vaccine have very modern reasons for not wanting it. They talk about religious beliefs, safety concerns or a distrust of former U.S. President Donald Trump and his contentious relationship with science. Only a handful mention Tuskegee, she said, and when they do, they’re fuzzy on the details of what happened during the 40-year study.

“If you ask them ‘What was it about?’ and ‘Why do you feel like it would impact your receiving the vaccine?’ they can’t even tell you,” she said.

Toler knows the details, but she said that history is a distraction from today’s effort to get people vaccinated against the coronavirus.

“It’s almost the opposite of Tuskegee,” she said. “Because they were being denied treatment. And this is like, we’re pushing people forward: Go and get this vaccine. We want everybody to be protected from covid.”

Questioning the Modern Uses of the Tuskegee Legacy

The “Tuskegee Study of Untreated Syphilis in the Negro Male” was a government-sponsored, taxpayer-funded study that began in 1932. Some people believe that researchers injected the men with syphilis, but that’s not true. Rather, the scientists recruited 399 Black men from Alabama who already had the disease.

Researchers told the men they had come to Tuskegee to cure “bad blood,” but never told them they had syphilis. And, the government doctors never intended to cure the men. Even when an effective treatment for syphilis — penicillin — became widely available in the 1940s, the researchers withheld it from the infected men and continued the study for decades, determined to track the disease to its endpoint: autopsy.

By the time the study was exposed and shut down in 1972, 128 of the men involved had died from syphilis or related complications, and 40 of their wives and 19 children had become infected.

Given this horrific history, many scientists assumed Black people would want nothing to do with the medical establishment again, particularly clinical research. Over the next three decades, various books, articles and films repeated this assumption until it became gospel.

“That was a false assumption,” said Dr. Rueben Warren, director of the National Center for Bioethics in Research and Health Care at Tuskegee University in Alabama, and former associate director of minority health at the Centers for Disease Control and Prevention from 1988 to 1997.

A few researchers began to question this assumption at a 1994 bioethics conference, where almost all the speakers seemed to accept it as a given. The doubters asked, what kind of scientific evidence is there to support the notion that Black people would refuse to participate in research because of Tuskegee?

When those researchers did a comprehensive search of the existing literature, they found nothing.

“It was apparently a ‘fact’ known more in the gut than in the head,” wrote lead doubter Dr. Ralph Katz, an epidemiologist at the New York University College of Dentistry.

So Katz formed a research team to look for this evidence. They completed a series of studies over the next 14 years, focused mainly on surveying thousands of people across seven cities, from Baltimore to San Antonio to Tuskegee.

The conclusions were definitive: While Black people were twice as “wary” of participating in research, compared with white people, they were equally willing to participate when asked. And there was no association between knowledge of Tuskegee and willingness to participate.

“The hesitancy is there, but the refusal is not. And that’s an important difference,” said Warren, who later joined Katz in editing a book about the research. “Hesitant, yes. But not refusal.”

Tuskegee was not the deal breaker everyone thought it was.

These results did not go over well within academic and government research circles, Warren said, as they “indicted and contradicted” the common belief that low minority enrollment in research was the result of Tuskegee.

“That was the excuse that they used,” Warren said. “If I don’t want to go to the extra energy, resources to include the population, I can simply say they were not interested. They refused.”

Now researchers had to confront the shortcomings of their own recruitment methods. Many of them never invited Black people to participate in their studies in the first place. When they did, they often did not try very hard. For example, two studies of cardiovascular disease offered enrollment to more than 2,000 white people, compared with no more than 30 people from minority groups.

“We have a tendency to use Tuskegee as a scapegoat, for us, as researchers, not doing what we need to do to ensure that people are well educated about the benefits of participating in a clinical trial,” said B. Lee Green, vice president of diversity at Moffitt Cancer Center in Florida, who worked on the early research debunking the assumptions about Tuskegee’s legacy.

“There may be individuals in the community who absolutely remember Tuskegee, and we should not discount that,” he said. But hesitancy “is more related to individuals’ lived experiences, what people live each and every day.”

‘It’s What Happened to Me Yesterday’

Some of the same presumptions that were made about clinical research are resurfacing today around the coronavirus vaccine. A lot of hesitancy is being confused for refusal, Warren said. And so many of the entrenched structural barriers that limit access to the vaccine in Black communities are not sufficiently addressed.

Tuskegee is once again being used as a scapegoat, said Lincoln, the USC sociologist.

“If you say ‘Tuskegee,’ then you don’t have to acknowledge things like pharmacy deserts, things like poverty and unemployment,” she said. “You can just say, ‘That happened then … and there’s nothing we can do about it.’”

She said the contemporary failures of the health care system are more pressing and causing more mistrust than the events of the past.

The seniors she works with complain to her all the time about doctors dismissing their concerns or talking down to them, and nurses answering the hospital call buttons for their white roommates more often than for them.

As a prime example of the unequal treatment Black people receive, they point to the recent Facebook Live video of Dr. Susan Moore. When Moore, a geriatrician and family medicine physician from Indiana, got covid-19, she filmed herself from her hospital bed, an oxygen tube in her nose. She told the camera that she had to beg her physician to continue her course of remdesivir, the drug that speeds recovery from the disease.

“He said, ‘Ah, you don’t need it. You’re not even short of breath.’ I said ‘Yes, I am,’” Moore said into the camera. “I put forward and I maintain, if I was white, I wouldn’t have to go through that.”

“She knew what kind of treatment she should be getting and she wasn’t getting it,” said Toler of L.A., contrasting Moore’s treatment with the care Trump received.

“We saw it up close and personal with the president, that he got the best of everything. They cured him in a couple of days, and our people are dying like flies.”

Toler and her neighbors said that the same inequity is playing out with the vaccine. Three months into the vaccine rollout, Black people made up about 3% of Californians who had received the vaccination, even though they account for 6.2% of the state’s covid deaths.

The first mass-vaccination sites set up in the Los Angeles area — at Dodger Stadium and at Disneyland — are difficult to get to from Black neighborhoods without a car. And you practically needed a computer science degree to get an early dose, as snagging an online appointment required navigating a confusing interface or constantly refreshing the portal.

White, affluent people have been snatching up appointments, even at clinics intended for hard-hit Black and Latino communities, while people of color have had trouble getting through.

It’s stories like these, of unequal treatment and barriers to care, that stoke mistrust, Lincoln said. “And the word travels fast when people have negative experiences. They share it.”

To address this mistrust will require a paradigm shift, said Warren of Tuskegee University. If you want Black people to trust doctors and trust the vaccine, don’t blame them for their distrust, he said. The obligation is on health institutions to first show they are trustworthy: to listen, take responsibility, show accountability and stop making excuses. That, he added, means providing information about the vaccine without being paternalistic and making the vaccine easy to access in Black communities.

“Prove yourself trustworthy and trust will follow,” he said.