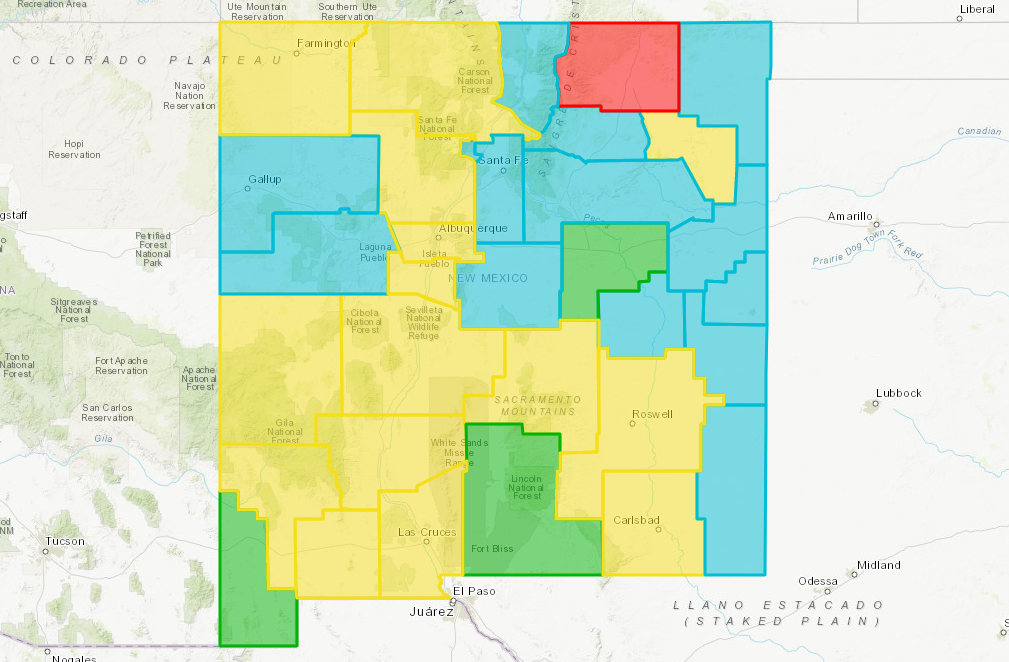 A top state health official said he believed all counties in New Mexico could be at the green or turquoise level by the end of May.

“Maybe I shouldn’t even say that, but my way of thinking, we will be an almost completely green and turquoise state by the end of May at the latest,” Human Services Department Secretary Dr. David Scrase said.

This all comes as Scrase said the state is finalizing a new red-to-green tier system, which he said could be ready as early as in two weeks, for the next red-to-green update.

With New Mexico’s new red-to-green status, 14 counties are in the turquoise level, including Santa Fe County, three are in green, 15 counties are in yellow, including the other four large population counties, and Colfax county is in the red level.

Counties at the turquoise level have the least restrictions related to COVID-19, while the county in red is in the most restrictive.

The state updates its red to green framework every two weeks, using two weeks of data. In the last two week period, five counties advanced to a less restrictive level, nine counties regressed and the remaining 18 counties remained at the level they were in as of the April 7 update.

To reach the green level, counties must have a 5 percent positivity rate and fewer than 8 daily cases per 100,000 residents (with adjustments for the counties with the lowest population totals). Counties that reach just one criteria are in the yellow level, while counties that reach neither are in the red level. If a county reaches the green level for two consecutive two-week periods, the county will reach turquoise status.

Of the counties in the yellow tier, Luna County was closest to reaching green status, missing by just a fraction of the cases per 100,000 criteria.

San Juan County, meanwhile, was closest to dropping to the red level, with a 4.93 percent positivity rate along with 17.7 daily cases per 100,000 residents.

Colfax County went directly from turquoise to the red tier.

The state has seen a plateau, which Scrase said he doesn’t believe is an increase, in new cases reported daily.

Scrase said he believes this is because of two factors: The drop in cases attributed to people who have been vaccinated and the increase in cases among those who have not followed COVID-safe protocols.

As of Wednesday, Department of Health Secretary Tracie Collins said, 57 percent of New Mexicans aged 16 or older had received at least one dose of vaccinations, with 39.4 percent fully vaccinated.

Last week, the state received 104,440 doses of vaccines—none of which were the Johnson & Johnson vaccine, which was paused by the federal government after extremely rare cases of blood clots.

She also emphasized that the vaccinations are free, and that there is no required social security number or government ID needed to receive the COVID-19 shot.

Hospitalizations have also plateaued, with a “few more cases” among those aged 18 to 35 and 35 to 60, Scrase said. The medical advisory team doesn’t believe that there is any indication that cases are increasing.

“I believe that the more we get folks vaccinated, the more likely we are to see that head down again, as we’ve seen deaths steadily decline,” Scrase said.