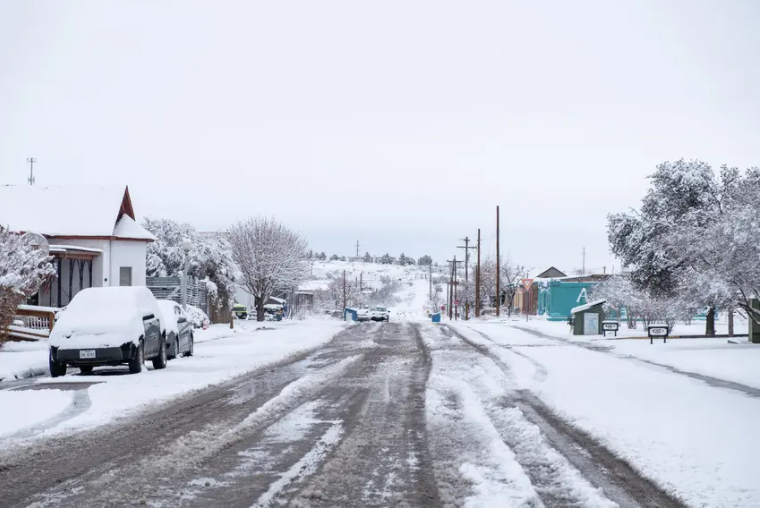 As humanitarian aid workers in Armenia and South Sudan, Jerry and Meaghan Kenney have huddled around wood stoves to keep warm and bathed with buckets for lack of water. But the couple didn’t expect they’d need such survival skills to get through the winter storm at their home outside Hudson, in deep East Texas.

The Kenneys, who have a 1-year-old and 3-year-old, had only intermittent power and water last week, and remain under a boil water notice.

The family huddled together under the covers, built indoor tents with sheets and blankets and lobbed snowballs at one another. But after so many days, they grew weary of sitting in the cold and the kids lost interest in playing in the snow.

“It’s hard to think about not being able to keep my kids warm, on a visceral level,” said Jerry Kenney. “From our time living in places where water was scarce, we knew instinctively to fill up bathtubs and pots and containers, and to let the water drip overnight. I’ll admit that me and the kids have not bathed every night, and fortunately, the water came back before my wife forced us all to bucket bathe.”

Like other parts of Texas, rural communities were hammered by the winter storm that left families without the basic necessities of heat and running water. But temperatures in the country dipped lower than in cities, plummeting to the low single digits. Fewer resources serve that larger geography, and without city services, mobility can be more limited. Many living in the rural areas are ranchers and farmers who also had to worry about and prioritize livestock and crops.

Mickey Edwards has about 3,000 acres of lease pastures scattered across Lampasas County, and spent the week using axes to chop holes in the sheets of ice that covered stock tanks and water troughs for his cattle, which number about 200. To ensure the cows survived, he brought 1,400-pound hay bales and feed to them early every morning last week, not returning home until just before dark.

On Tuesday, during the 100-mile round trip to tend to his cattle, Edwards’ truck stalled on an incline slick with ice. No one had salted or sanded the country roads. Another truck barreled down the road in his direction, lacking traction and unable to stop, prompting Edwards to jump from his vehicle, past the ditch on the side of the road, to a fence. It was a close call with no impact or injuries.

But the trip was necessary.

“We know other ranchers aren’t as in good shape as we are,” said Edwards, whose family has been in the ranching business for eight generations — since before the Civil War. “We didn’t have that second sheet of ice. Some of our friends near Florence couldn’t even drive because they had an inch of ice on top of the snow, so they were homebound and couldn’t get off their home place to go check cattle. They probably didn’t fare as well as we did. We feel very fortunate.”

The cold was too much for the newborn calves and many lost cattle.

“Livestock-wise on the dairy end, it’s just a struggle. You try to keep them fed, keep them milked, keep them watered,” said Russell Boening, a dairy farmer in Poth, southeast of San Antonio. “A lot of our beef cows are having babies right now. You have to get to them pretty quick after they’re born… Everyone is doing what they can to save those babies. We lost a couple. We couldn’t get there in time.”

Boening, president of the Texas Farm Bureau, said he’s been at this work for nearly 40 years. He has never seen a weather event like this in South Texas and is hearing similar stories across the state from the organization’s 500,000 members.

Vegetable and citrus farmers suffered substantial losses, he said. And while at least half of the citrus crops of oranges and grapefruit had already been harvested in the Rio Grande Valley, he said the losses for that region alone total more than $300 million so far.

“It’s difficult to prepare for what you’ve never lived in,” Boening said.

“There hasn’t been anyone who was spared the craziness,” said Randy Willis, superintendent of the 450-student Granger Independent School District, in northeastern Williamson County. “It’s been a challenge for every superintendent, whether you’re big, small, rural or urban. It’s one of those once-in-a-lifetime things. … We had people without water or power for over seven days.”

A water pipe burst within the 1924 Building that houses the district’s middle and high school students, rendering a classroom unusable. But with some teachers and students still lacking power and the internet, the district might not reopen Monday, not even virtually. (After the winter break, about 90% of students had returned in person for school.) Willis, who was on the verge of losing water again Friday night, said he wants to return students to normalcy as soon as possible, but will assess the situation Sunday night. He said he must weigh “the human cost” on students and staff members, and the stress they’ve endured in the past week.

In Marfa, the south side of Lincoln Street was without power Monday through Wednesday. The northern neighborhoods remained online. Marfa ISD’s campus straddles Lincoln Street, so the main campus didn’t lose power, but the bus barn across the street did.

Local officials partnered with MISD Superintendent Oscar Aguero last Monday afternoon to turn the cafeteria into a warming center, with cots available in the gymnasium. Those who lost power had a place to warm up, charge their electronics and get a meal. Local grocery stores — Porter’s Thriftway and The Get Go — and some individuals donated extra food and water. With the help of MISD cafeteria staff and volunteers, they were able to provide 60 to 75 meals for breakfast and for lunch.

Audrey Herrera grabbed a meal on Tuesday as the food in her fridge had gone bad. Growing up in southern California, she’s never experienced a “real winter” until she moved to Marfa in 2019, and she didn’t properly prepare for the outages. She was able to stay warm with the gas heater in her casita. Her co-workers donated food and supplies, and her neighbors provided hot water.

“It kind of felt like we were in it together, even though I live alone,” said Herrera.

The West Texas Food Bank in Odessa delivered 150 boxes of food to the Marfa Food Pantry Friday night, and planned to bring an additional five pallets. Elbert Bassham, the program manager, texted the residents he normally sees at the pantry’s bi-weekly distributions to let them know about the food and vegetables ready for pick-up, and word spread on social media. Since the COVID-19 pandemic, the pantry has served an average of 100 families with an average of two to three individuals per family.

Bassham stopped by the pantry every day to power the refrigerators and freezers with a generator. The generator is powered by gasoline, so it was limited because the power was off at the three stations in town. Bassham was able to borrow some until he drove to Alpine, where KC’s Mart still had gas.

“I filled up every container I had, plus my car and everything, in anticipation of more issues,” said Bassham. “As it turns out, we don’t need it. I have extra gas now.”

In Milam County, part of the San Gabriel River froze. Water lines and pumping stations froze in Rockdale and Cameron, home to about 5,000 residents each. On Friday, about 10% of this agricultural community, about 75,000 acres of which is crop land and 225,000 of which is ranch land that runs cattle, remained without electricity and 15% without water. The county remains on a boil water notice for those who have it.

“It’s been pretty miserable,” said Milam County Judge Steve Young. “It’s been one thing after another. It’s just been a mess.”

With the power out, the sewage treatment plant in Rockdale couldn’t operate properly.

“They were just about at the point of pumping raw sewage into the creek,” said Young, who was among Milam County residents still without power on Friday.

The electric company was able to get things back online at the plant Friday, avoiding disaster.

Young, also a cattle rancher, lost two newborn calves but was able to save three others, including one Friday morning, when he got up at 3:30 a.m. to ensure its survival upon delivery.

“You sponsor that old cow all year for that calf, and that kind of thing happens, and it really sets you back,” Young said. “It’s no big deal in some ways, but doggone, I hate that. It’s more than just economics, it’s a terrible loss.”

Goodall-Witcher Hospital, located in 4,500-resident Clifton, located northwest of Waco, is Bosque County’s only hospital. It was never without power for long, but the water main burst, spilling into the generator room and forcing the medical center to shut off the water to the fire sprinkler system. It could be several more days before it’s repaired.

Multiple patients without power at home were admitted with breathing problems after their oxygen machines were turned off. Between six and a dozen staff members spent the night at the hospital after conditions made it too dangerous to travel back and forth. CEO Adam Willman, who has a four-wheel drive truck, also picked up employees from their homes. One of the clinics in the health system couldn’t open because of power and water outages.

“We took everything day by day,” Willman said. “We’re exhausted, but in the end, we did what we had to do to take care of everything we needed to do.”

Rural Texans also told stories of joy amid the hardship. Neighbors helped neighbors, letting them stay at their homes or shoveling ice and snow from their sidewalks. Volunteers worked overnight to cook for warming centers and keep them staffed. While the icy roads kept Young from reaching his 93-year-old father whose pipes froze at his Rockdale house, leaving him without water, local police officers delivered a case of water bottles Friday morning. A Goodall-Witcher emergency room nurse, who volunteers at a local animal shelter, checked on a patient’s dogs.

“I love living in rural communities and East Texas,” said Jerry Kenney, whose neighbors came to shower at his house when his family had power and water. The neighbors, in turn, offered to pick up supplies. “There’s a sense of belonging and a resilience that is unique. I have no doubt that I can rely on my neighbor in a time of trouble.”