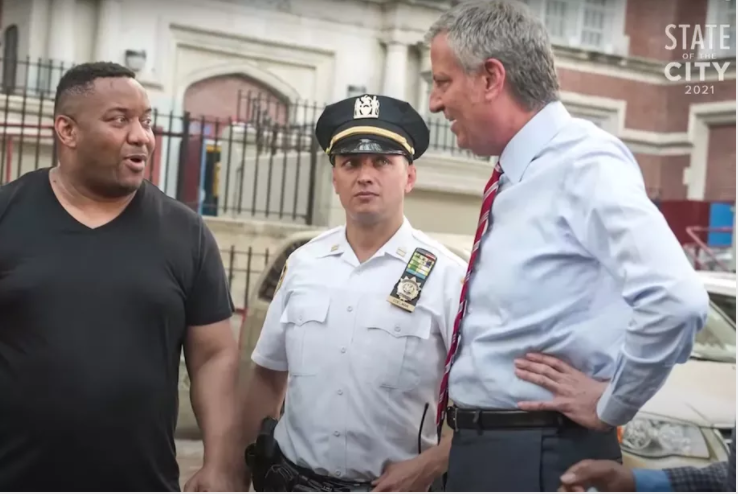 In his virtual State of the City address last week, Mayor Bill de Blasio touted his new plan to give community leaders a role in selecting NYPD precinct commanders.

The mayor spoke against a backdrop of a slide showing him smiling as he stood with a cop in a white shirt and another man. A second image shows de Blasio, the same cop and other officers, with the title, “Community Voice in Choosing Precinct Commanders.”

But the high-ranking police officer in the images is long out of the picture at Brooklyn’s 73rd Precinct — transferred from his Brownsville command after he stood by and watched one of his cops shove a young protester during an anti-police brutality demonstration in Brooklyn last spring.

Councilmember Alicka Ampry-Samuel (D-Brooklyn) said she was shocked when she recognized Deputy Inspector Craig Edelman in the State of the City presentation — and was immediately bombarded with texts from community leaders.

“Either it was done on purpose to say that if you think that the community actually has control this is a way to show that we’re still in control,” she told THE CITY. “Then I said maybe this wasn’t intentional. Maybe this is just them being so naive and stupid that they don’t even know what they’re doing.”

Ampry-Samuel is among the community leaders who blasted Edelman for allegedly spurring his cops to harass Brownsville residents during the early weeks of the pandemic lockdown. She even complained directly to de Blasio about the commander.

Edelman was later captured on video looking on as Officer Vincent D’Andraia, one of his cops from the 73rd Precinct, shoved protester Dounya Zayer to the street on May 29 — the first night of the local protests that erupted following the death of George Floyd at the hands of Minneapolis police.

D’Andraia was suspended without pay and hit with misdemeanor assault and other charges. He has pleaded not guilty.

Anderson initiated a more hands-off policing approach that was applauded by the community and praised by de Blasio, and is now being tested elsewhere in the city.

Bill Neidhardt, a de Blasio spokesperson, did not respond to questions Monday about the thinking behind using Edelman in the video. But he called the presentation that included Edelman “an initial version” — and sent a link to another version in which the embattled cop had been edited out.

“We want a video that inspires New Yorkers and shows the city will recover for everyone, not just the wealthy or powerful,” Neidhardt wrote in an emailed response. “The recoveryforall.nyc.gov website will continue to change as we roll out the recovery and continue lifting up stories and people that inspire. That’s the goal, and we’ve been encouraged to hear from folks who are ready and excited to join in the recovery effort.”

As of early Monday evening, the mayor’s YouTube page still featured the version with Edelman.

De Blasio gave his final State of the City via video, due to the pandemic. One key new policy announcement: his plan to change the way precinct commanders get their jobs.

The police commissioner currently makes the appointment without consulting the community. But de Blasio’s new plan is to allow community leaders to participate in the process by interviewing three top candidates and then making a recommendation to the commissioner.

“We’ll also ask the community to help us decide who are the best local police leaders for their neighborhood,” the mayor promised in his State of the City address. “From this point on, the selection of precinct commanders will be made with the engagement of the community.”

As the mayor says this, a slide emerges with de Blasio standing next to Edelman, whose badge is clearly visible. That fades to a second slide that also includes Edelman.

‘Complicity in This Behavior’

As THE CITY reported in June, Ampry-Samuel and Assemblymember Latrice Walker (D-Brooklyn) said cops — Edelman and D’Andraia among them — confronted a small group of youths hanging out near the Marcus Garvey Village Apartments on Memorial Day weekend.

At the time, the city was advising people not to gather in groups.

As Walker and Ampry-Samuel watched, they said, D’Andraia knocked a marijuana joint out of one young man’s mouth and began rifling through his pockets.

When Ampry-Samuel confronted Edelman, she said he told her, “They have to learn to respect us.”

The Council member said that when she spoke to de Blasio about this and similar incidents, he responded that he was “working on making sure Brownsville had what it needed, that he was committed to addressing gun violence but also repairing police- community relationships.”

The video showing D’Andraia suddenly pushing Zayer and Edelman strolling by as if nothing had happened was taken that same weekend.

Zayer, 22, of Queens, recently filed a lawsuit against both D’Andraia and Edelman after battling what she has described as ongoing physical and emotional harm as a result of the incident.

Tahanie Aboushi, Zayer’s lawyer, said that seeing the mayor align himself with Edelman after the May 29 incident “lends itself to the fact that there’s complicity in this kind of behavior.”

“I can’t see how this was an accident. I mean, how do you not vet who we are presenting as an example of a police leader, an example for commanders and officers to follow,” Aboushi, who is running for Manhattan district attorney, told THE CITY.

Walker, who grew up in Brownsville, said she was disappointed with the mayor’s inconsistent messaging.

“It is interesting that you discuss police reform with such fervor but still choose to feature a figure that has basically terrorized a community for years,” she told THE CITY via email. “Whether you consciously or unconsciously included him in the presentation for the State of the City, it was insensitive.”

Ampry-Samuel said she contacted City Hall Thursday night after seeing the State of the City address. The next morning, she said, she was told there had been a mistake and that the photos would be switched for pictures without Edelman.

“They said we’re having folks take it down now and replacing the pictures,” she said. “They apologized a million times.”