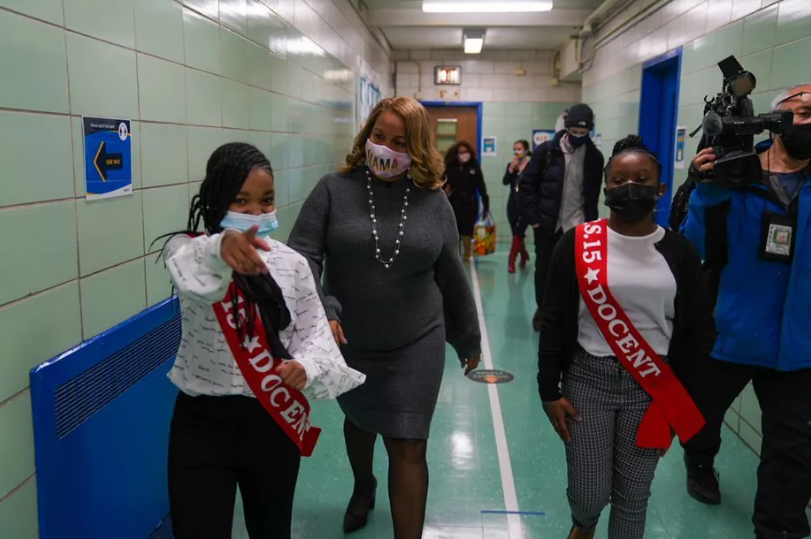 New York City schools that saw enrollment drops this year will no longer be on the hook to give the education department back money for their shrinking rosters, schools Chancellor Meisha Porter announced Monday.

The move to hold schools harmless during the pandemic reverses the standard policy requiring schools pay the city back mid-year for student attrition — or go into debt the following year. It’s a big reprieve for hundreds of schools, as enrollment has dropped substantially this school year, with the most acute losses in pre-K and kindergarten.

“As a former principal I know what a huge relief this will be for our school leaders who have the opportunity to be forgiven the debt based on their register loss,” Porter said. “I’m happy we can do this for them, but more importantly what this will do for our students during this most challenging time.”

City schools lost 43,000 students, or roughly 4%, dropping more this year than in the previous 14 years combined, according to a Chalkbeat analysis. Monday’s announcement cancels $130 million worth of cuts from 877 schools that enrolled fewer students than the city projected, Mayor Bill de Blasio said.

City officials said they were able to restore the funding thanks to a $4.5 billion infusion from the latest federal coronavirus relief bill, one of the de Blasio administration’s first funding decisions since the federal bill passed this month.

Previously, city officials told schools they would have to cough up only 75% of the money they owed because of attrition. The decision to forgive all of the money will be welcome news to many schools, some of which owed hundreds of thousands of dollars. The reversal comes after union leaders and elected officials criticized the city’s decision to move forward with cuts even as schools were struggling with staffing challenges and other costs connected to the pandemic.

The majority of schools across the five boroughs lost students, though some schools lost more than others. One in four lost at least 10% of their students, with the greatest declines coming in pre-K and kindergarten. Brooklyn’s Brownsville neighborhood (District 23) had the highest percentage of schools with large declines, followed by Harlem’s District 5. Schools that serve new immigrants have also seen significant enrollment drops.

A small group of schools that serve wealthier families lost a significant portion of their enrollment, but overall, far more low-income students have left the system.

Former Chancellor Richard Carranza previously indicated that the department was interested in holding schools harmless, but that it would be too expensive to hold budgets steady without additional funding. He has also suggested that keeping budgets flat would disproportionately benefit wealthier schools, though the education department did not provide data to support that claim.