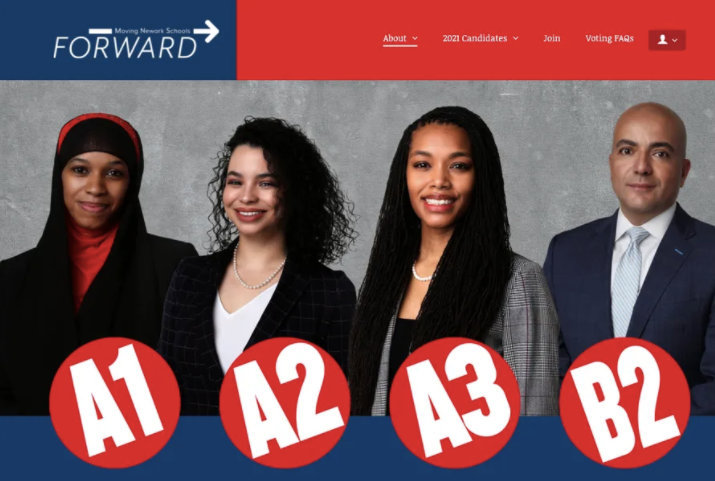 Newark voters choose candidates with political backing for school board

Newark voters on Tuesday chose candidates backed by powerful elected officials to fill four open seats on the city’s nine-member school board, according to preliminary results.

The winning candidates — two incumbents, a state senator’s aide who was filling a temporary board vacancy, and a newcomer — now face the monumental task of helping oversee the school system’s recovery from the coronavirus pandemic. Part of that task involves managing the district’s $1.1 billion budget plus $84 million in expected coronavirus relief money and millions of additional dollars from the federal stimulus package.

The two board members elected for second terms are Dawn Haynes, the board’s vice chair and the mother of three Newark Public Schools students, and Asia Norton, a former charter school teacher who chairs the board’s legal committee. Vereliz Santana, the state senator’s aide who was selected in January to fill a board vacancy until the election, won a full position on the board. All three will serve three-year terms.

Daniel Gonzalez, a Newark schools graduate who previously served as the city’s finance director, was elected to replace a board member who died last year. His term lasts one year.

“We are extremely proud of our team and the work they put into this campaign,” said a statement from Sam Gonzalez, chair of the North Ward Democratic Committee and campaign manager for the winning slate. “Now that the election is over, it is my hope that we can all come together and continue to keep our focus on educating the children of Newark.”

Voters also approved a local tax levy to help fund the city’s schools. The tax rate will remain flat because the district did not seek an increase as it had the past two years.

Not all votes had been counted by Tuesday night, but the apparent winners held leads that would be difficult to overcome.

The victors ran on the Moving Newark Schools Forward slate, which originated several years ago when Mayor Ras Baraka, elected officials from Newark’s North Ward, and charter school advocates decided to join forces rather than keep backing opposing school board candidates. The coalition’s chosen candidates have prevailed in every election since the slate was formed in 2016.

As usual, the slate candidates had several major advantages: the endorsement of the mayor, city council members, and state lawmakers; campaign support from the local Democratic party; and thousands of dollars in contributions. Their four independent challengers had none of those things.

“I’m running against three candidates and a political machine,” said Phillip Wilson, one of the independent candidates, who spent Monday evening knocking on doors and handing out fliers by himself. “I don’t think that’s fair.”

The other independent candidates were Nadirah Brown, Yolanda Johnson, and Sheila Montague.

Unlike last year’s vote-by-mail election, voters had to visit a polling station Tuesday or request a mail-in ballot. Polling sites inside some senior centers were closed due to the pandemic.

Despite those challenges, the slate had plenty of help getting out the vote. Current board members handed out fliers. Buses provided by the slate’s backers ferried senior citizens to polling sites. And trucks equipped with video monitors, along with a float bearing banners and loudspeakers, promoted the slate candidates.

Project Ready, a Newark-based organization dedicated to civic engagement, also encouraged residents to participate in the election. The nonprofit, which does not endorse candidates, made some 30,000 phone calls and sent 7,000 text messages to registered voters.

Nayibe Capellan, the group’s chief of staff, said the school board’s responsibility to ensure that students bounce back from the pandemic made this election especially urgent.

“Learning loss is real; the trauma the students experienced is real,” she said. “Children’s lives are at stake.”

Polls closed in Newark just hours after a Minneapolis jury found former police officer Derek Chauvin guilty of murder in the death of George Floyd. Floyd’s killing prompted conversations in many Newark classrooms about systemic racism and police mistreatment of Black Americans, and added to calls for lessons and textbooks that address those issues head on.

Some of that work will fall to the school board, which approves the teaching materials used by district schools. Norton said Tuesday that she plans to push the district to continue updating the curriculum so it accurately reflects the nation’s history, including its legacy of racism. She also said that teachers need more training on how to lead classroom discussions about racism and social justice.

As a Black woman and mother of a Black child, Norton said she has long grappled with these issues.

“I’ve been thinking about this ever since I was born,” she said.