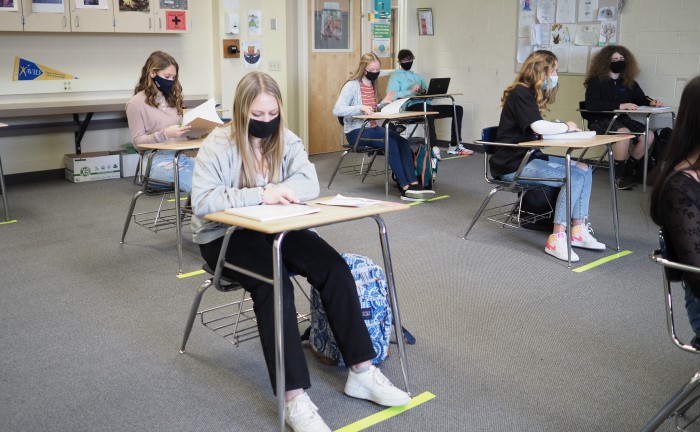 Raffles. Parties. Extra credit. And an opportunity to shave a principal’s head.

These are some of the incentives that leaders in Shelby County Schools are promising students – especially virtual learners – who come to class in person next week for the state’s standardized tests.

The annual state assessment, previously known as TNReady but now called TCAP, starts Monday in Memphis schools, and per state orders, 80% of students in a district must take the test in person. The state said that there will be repercussions for districts that don’t meet the threshold.

The testing turnout — and results — for Tennessee’s largest district are being closely watched across the state because, in March, Shelby County Schools  became the last district to reopen school buildings. Results for students may serve as a referendum of sorts for Superintendent Joris Ray’s decision to delay in-person learning.

Shelby County Schools has 111,000 students, and the majority have opted for virtual learning this year. So how do you get more than 60,000 students back on campus for multiple days of testing?

Grandview Heights Middle School Principal Deartis Barber hopes to get students into the classroom by putting his hair on the line.

“If I can get all of my students to come in and test on Monday, Tuesday, Wednesday, and Thursday,” said Barber, “then there will be a sixth grader, seventh grader, and eighth grader…that will shave my head.”

Barber said that a student in each grade who has completed the test and the most online math tutoring will get the honor of holding the “grand clippers.” The Memphis native got the idea from watching wrestling when an opponent cut the loser’s hair. He wants at least 90% of his students to participate, and he wants to give his students a fun experience in a challenging year.

During testing season, students in grades two through eight take comprehensive exams and high school students take subject-area exams. Unlike families in other states, Tennessee students and parents don’t have the choice to opt out of the state test. District officials said that it is “still unclear” what will happen if they don’t hit the 80% benchmark for the test, but state and district officials have said that test scores and participation rates will not factor into teacher and principal evaluations this year.

To help ease parents’ angst about returning their children to campus, school leaders have held open houses to allow parents of virtual learners to see the COVID-19 protocols in place at their children’s schools. They also sent out a survey asking parents if their children needed transportation on testing days. Only about 10,000 families completed the survey.

CDC social distancing guidelines mean only about 14 students are allowed in a  typical Memphis classroom.  As a result, district officials will convert cafeterias, auditoriums, gyms, and offices into testing centers. They also are staggering the testing days for different grades and condensing the testing window into three days per grade.

Typically, the test would stretch out at least a week with students taking different sections each morning. This year, students will take some sections in the morning and other sections in the afternoon. Students who complete all three days of testing will earn class participation credit.

“It will kind of serve somewhat as extra credit for those students, but there’s no penalty for the other students,” said Bill White, executive director of planning and accountability. “There’s no zeros for the ones who don’t come. It’s a positive incentive only.”