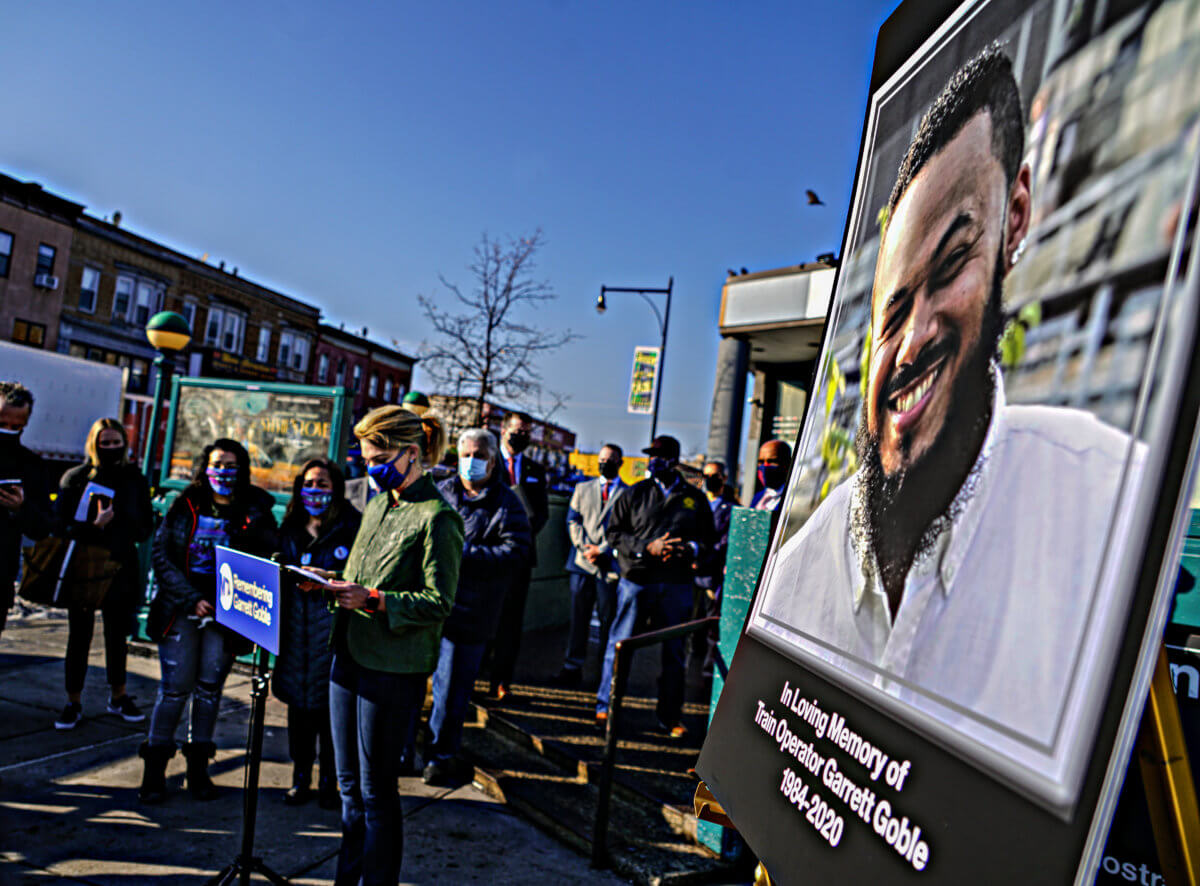 A subway motoman killed nearly a year ago when his train was torched inside a Manhattan station will be remembered on the anniversary of his death by fellow transit workers with a memorial Brooklyn-to-The Bronx ride on the No. 2 line.

Garrett Goble, 36, died March 27 when an alleged arsonist lit a shopping cart in one of the subway cars on fire, causing the train to burst into smoke and flames as it pulled into the Central Park North-110th Street station shortly after 3 a.m.

“It’s been excruciatingly painful,” his mother, Vicki Goble, told THE CITY. “There is a void there that can never be filled again and we are trying to traverse life as best we can without the nucleus of our family.”

The memorial ride for the slain motorman’s loved ones and coworkers will begin around 2 a.m. — while passenger service is suspended in the subway — at the time Goble started his final run out of the Flatbush Avenue-Brooklyn College terminal.

It will take friends and family to the other end of the No. 2 line at Wakefield-241st Street in The Bronx and plaques will be hung in the crew rooms at both ends of the line. The only stop, organizers said, will be a brief one at Central Park North-110th Street, where another memorial will be held outside the station later that morning.

“That day is Double G day, that’s his day,” said organizer Berlinda Peek, an assistant train dispatcher who worked with Goble on the 2 line. “We want the people to know that Goble didn’t die in vain, and that every time a year comes around, we will be doing something in his honor.”

On the day he died, Goble was operating a nearly empty train at a time when the pandemic had caused subway ridership to fall by nearly 90%, according to MTA figures. Nearly 150 employees of the transit agency have died of COVID-19, most of them subway and bus workers.

Some 16 people were injured after Goble, a conductor and another off-duty transit worker helped riders evacuate as the train went up in flames. The motorman was found unresponsive on the tracks, and authorities did not make an arrest in the case until December.

Nathaniel Avinger, who had been a suspect in the arson case since March, has been charged with murder in Garrett’s death.

“I can’t even begin to express how we’ve felt this past year,” Vicki Goble said of her only son, a father of two boys. “The workers have supported us the whole year and they’ve been nothing but good to us.”

Sarah Feinberg, the interim president of New York City Transit, said the agency will work closely with Goble’s family on the tribute.

“We honor and remember Garrett every single day and will do so on this first anniversary, as well,” Feinberg told THE CITY. “I’m grateful to Garrett’s coworkers who continue to honor his memory and life.”

The MTA previously announced plans to install memorial plaques and artwork at the Flatbush Avenue-Brooklyn College station, which Goble grew up using. Transport Workers Union Local 100 is also establishing a college scholarship in his name.

Coworkers had, for months, been planning a memorial ride. Vicki Goble said it will be her first ride on the subway since her son’s death.

“My son was a good person and he would do anything for anybody,” she said. “It means a lot that people care enough to do this for us.”

Jamar Pearson, a train operator and friend of Goble’s, said transit workers have been looking for ways to recognize their colleague for nearly a year.

“Quite an effort went into getting clearance for this,” Pearson said. “Everyone was like, ‘Let’s make it happen,’ and everyone has been supportive from the bottom to the top.”

Vicki Goble said she is grateful for what transit workers have done for her and her son.

“I just want to thank all the workers and friends who worked with him who are making this possible,” she said. “That is an extended family for us.”