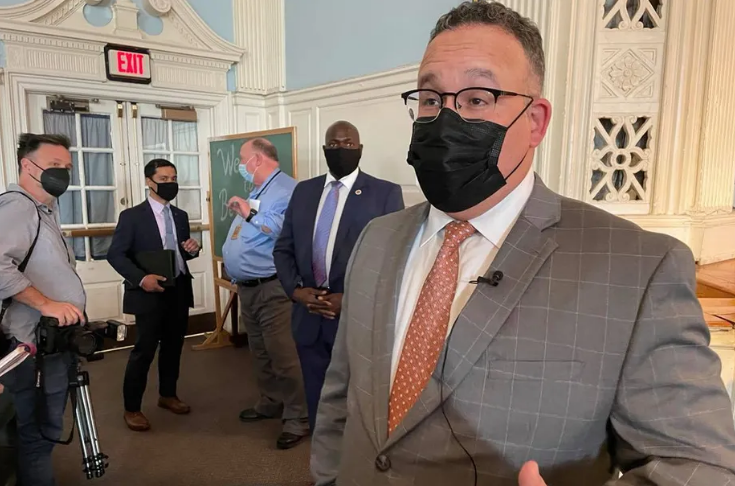 U.S. Secretary of Education Miguel Cardona visited Philadelphia and Upper Darby Tuesday, declaring that schools can safely reopen for in-person schooling and offering the help of the federal government to make it happen soon.

“That’s the message we want to get across the country, that we can safely reopen schools if we follow certain steps and we can do it quickly,” Cardona said on a visit to Olney Elementary School. “Because everything that happens when children are sitting at home and that’s the only option for learning, we know it’s not the optimal.”

Cardona’s visit was part of the Biden administration’s Help is Here tour, which kicked off in Boston on March 31 and is designed to monitor the progress of the president’s goal to reopen kindergarten to eighth schools within his first 100 days in office. And it came on the heels of district Superintendent William Hite’s announcement Monday that schools would open for third to fifth graders who elect to return starting on April 26, and for students in sixth through eighth grade who have complex needs.

Cardona, who started his career as a teacher and principal in his home district of Meriden, Conn., was commissioner of education for that state when tapped by President Joe Biden to become education secretary.

During his time in Connecticut, he pushed for all school districts to open for in-person learning, and all but one did, even as teachers resisted.

On Tuesday, Cardona visited two second grade classrooms at the annex of Olney Elementary School. Hite and Olney Principal Michael Roth accompanied Cardona during the classroom tour before sitting down for a roundtable discussion with several district staffers and a parent and teacher from the school.

“I look forward to opening conversation about what’s working, what’s not working, and what we need to know to support you,” Cardona said during the roundtable discussion.

“For me, their health and safety is something I take very seriously,” he said, noting that his wife teaches middle school and he has two children in high school in Connecticut

About 80 of Olney’s 232 students in kindergarten through second grade have elected to return. Under the school district’s hybrid system, half the students attend on Monday and Tuesday and the other half on Thursday and Friday. Wednesdays are all virtual.

Cardona elbow bumped Grunmeier, nodding as she moved around her classroom.

The district’s attempts at reopening schools for in-person learning were delayed three times before a gradual reopening began March 8, after a mediator helped to resolve a dispute between the teachers union and the district around adequate ventilation and other safety issues. The average age of Philadelphia’s school buildings is 70 years. Health concerns over mold, lead, and asbestos in aging buildings have plagued the district for years.

“Not every school is the same, not every district is the same, and I understand the infrastructure needs here are great,” Cardona said. “I understand that your buildings are a little bit old. So, I’m very interested in hearing how you navigate that and what we can do as an administration to support you moving forward.”

Later, during a stop in Upper Darby, Cardona said he learned of Philadelphia’s problems with ventilation and said it was useful to learn about the steps it took.

“That’s why it’s important for me to be on the ground and hear what the unique challenges are,” he said. “One thing that I saw there is that they partnered with a third party to do air quality assessments and ensure that the number of students in the classroom is limited to the number based on the air quality.”

The district is slated to receive nearly $1.3 billion through Biden’s American Rescue Plan. District leaders said they would devote $345 million to infrastructure needs.

Jerry Jordan, president of the Philadelphia Federation of Teachers, also met with Cardona at Olney. He said that while the union is still carefully monitoring conditions in schools, he supports the district’s reopening efforts, especially since all teachers in Philadelphia have the opportunity to be vaccinated.

“It’s obviously good to give children the opportunity for face-to-face instruction,” he said.

The U.S. Department of Education has also mandated standardized testing this year, declaring it necessary to assess how the pandemic has affected student learning. It gave states the option to extend the time for the testing, which usually occurs in the spring. Pennsylvania has extended the testing window until September. The state’s acting secretary of education, Noe Ortega, who also met Cardona at the Olney stop, said the tests will not be used this year in a “high stakes” fashion to pass judgment on schools and districts.

“The rationale is that we really do need to know what has been lost but also what has been gained. There might be circumstances where things have been working, and these are things we need to find out,” Ortega said.

Cardona reinforced that idea in his interview with reporters.

“Using statewide assessments to assess where students are is one indicator of how we can make sure that the $130 billion in the American Rescue Plan is going toward those students that have the greatest need,” he said. “We know that reopening schools is not one size fits all.”

While it “makes no sense” to bring students to buildings just for assessments, he added: “If we don’t know where our students are, in terms of how they’ve accessed learning over the last year, we’re missing an opportunity to really make sure that our recovery is aimed at addressing achievement disparities that have plagued our country for years and have been made worse this past year.”

Hite said that Philadelphia had not yet finalized its plans for testing students, but noted that it must do so in order to continue eligibility for federal funding. Since the tests must be given in person, only some students will take them. Many teachers and parents have complained that they will be a diversion from more important student needs as they return to in-person instruction.

“We’ll make a good faith effort, probably in late spring,” he said. “Every time we get information about where students are, it is important.”

Cardona said that the department will be looking at new data to inform recommendations on when middle and high school students should return to school.

“We need to try to reopen schools as quickly as safely as possible. Our students can’t wait until the fall. If we can safely reopen now. We should be doing it now. They deserve it.”

This article was originally posted on In Philadelphia, education secretary says schools can open safely