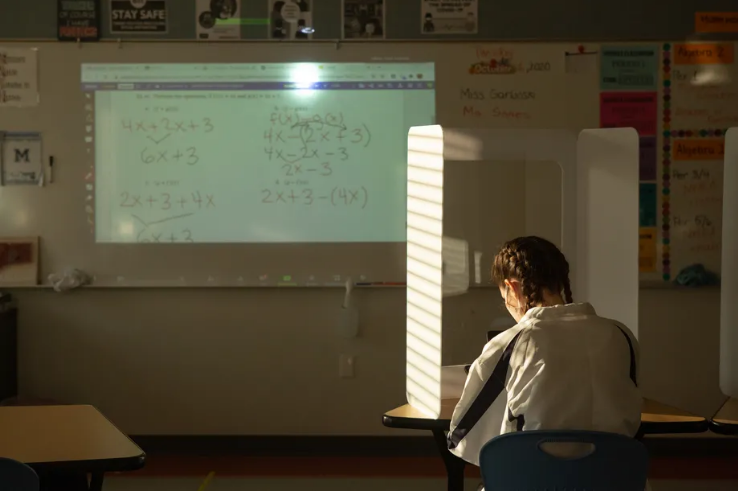 State tests for English, math, and science are slated to be given to New York’s third through eighth graders this spring, but they are expected to look a lot different.

Despite state officials requesting a waiver from the federal government to cancel the exams, the Biden administration is requiring them, citing the need to understand how students are performing after a year of disrupted learning. The exams, however, are supposed to be low stakes. Schools won’t be held accountable for the results or for the number of students who take them.

State officials are still asking the federal government for a cancellation  — which may be a longshot request. For now, officials are moving forward, issuing guidance this week on how to administer the tests during an ongoing pandemic.

Not only will the exams be shortened, but remote students will not have to take them. The state won’t force children to go into school buildings just to sit for an exam. In New York City, roughly 70% of students are learning exclusively from home. Schools that are fully remote, like several charter networks, will not be required to offer the exams at all. New York City’s largest charter network, Success Academy —which has a reputation for intense test preparation and high state test scores — is choosing to forego the exams this year, according to a Success spokesperson.

The New York City Department of Education “will be sharing guidance with schools in the coming days” based on the information provided by the state, said Sarah Casasnovas, a department spokesperson.

Here’s what we know so far about state tests this year.

The grades 3-8 tests will only be offered on-site, with schools opting to give paper or computerized versions. Most New York City schools have stuck with paper tests in the past.

The shortened version of the exams means that students will be required to take just one section of the math test and one for English. Previously, the exams had two parts. Similarly, students in fourth and eighth grades taking the science test will only have to complete the written portion.

For hybrid students, the state is allowing schools to give the exams on whichever day a particular cohort is in school, meaning an in-person student won’t have to come in on a remote day.

Schools can choose to offer the second portions of all these tests, but scores on those portions won’t be collected by the state, according to a memo from the state education department.

When will the exams be given?

English tests for grades 3-8 are scheduled for April 19-29, while the math test is slated for May 3-14. Science tests for grades 4 and 8 will take place between June 7-9. (You can see the schedule here). Schools can use the entire windows of time to give the tests.

My children are remote. Will they have to take state tests?

No. While the federal government is allowing states to offer these assessments remotely, New York State education officials have decided that it won’t be feasible to do so, pointing to students’ unequal access to reliable internet and devices.

“Schools are not expected to bring students into the building to participate in the tests if the students are receiving entirely remote instruction during the testing windows,” wrote Steven E. Katz, assistant commissioner for the state’s office of assessment, in a memo to school districts.

Can I opt my child out of the test?

Yes. Even before the pandemic, parents had the right to opt their child out of standardized tests. New York City’s education department has previously advised parents to speak with their child’s principal if they’re interested in opting out.

In one of his final days as chancellor, former schools chief Richard Carranza voiced strong opposition to state tests this year and encouraged parents to think about whether opting out would be right for them. Carranza also said that he was advocating alongside state education officials for the federal government to rethink their stance on tests this year.

New Chancellor Meisha Porter will not continue that advocacy, according to department spokesperson Casasnovas.

“Families are facing many different circumstances, so we are empowering them to make the best decisions that suit their particular needs,” Casasnovas said.

I want my children to take the tests, but they are learning from home full-time. What do I do?

This is possible — the only guidance from the state is that students should not be forced to come in.

State officials are encouraging schools to talk to fully-remote families in order to gauge their interest in taking the test. This week, Commissioner Betty Rosa also encouraged parents to talk with their school leaders if they’re interested in taking the tests.

Will my children and/or school be penalized if they don’t take these tests?

No. This year, the federal government is waiving accountability requirements for tests. That means that schools won’t be held responsible for test results.

Additionally, schools won’t be penalized in any way if less than 95% of students decide not to take the test. Previously, a low test-taking rate factored into a school being labeled by the state as “struggling.”

My child will be applying to middle or high school next year. For the schools that have academic admissions screens, does my child need to take state tests?

It’s unclear what admissions to middle and high schools will look like next year, but there’s reason to believe they may not include state tests.

City officials suspended the use of test scores in middle schools admissions this year, given that no student took state tests in 2020. High schools were still allowed to screen for scores prior to 2020. Since remote students won’t be forced to take tests, it’s possible that officials will take a similar approach for admissions next year, too.

High schools this year were still permitted to use academic records for their admissions processes, while academic screening was put on pause for middle schools.

What’s going on with Regents exams?

State officials voted this week to cancel all Regents exams for grades 8-12, except those in Algebra I, earth science, living environment, and English, which New York districts are federally required to offer.

The federally required exams will be given from June 17-24 (except on June 18 in observation of Juneteenth).

Officials also voted to remove the tests as part of graduation requirements this year, meaning students won’t have to take any exams to graduate this year. Instead, students must pass their Regents-related course by the end of the summer in order to earn diploma credit.

Students who took a course in past years and intended to take the exam this June can still be exempted from exams as long as they passed the course. All August exams are canceled.