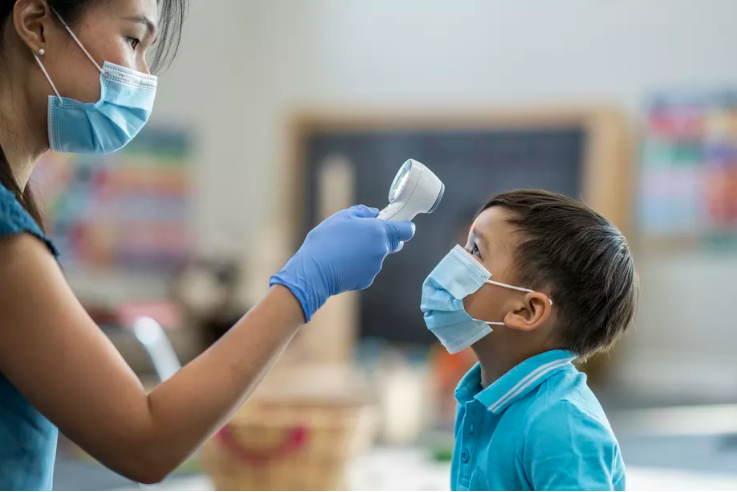 Chicago’s teachers will get vaccinated. When will its child care workers?

Eight months after her Portage Park child care center reopened to families, Genny Geronimo went online to the city of Chicago website for COVID-19 vaccinations, filled out a survey to put her dozen workers in the queue, and waited.

Illinois child care workers technically qualified for vaccines beginning in the state’s second phase, on Jan. 25, along with adults age 65 and older and essential workers like public transit drivers. Teachers in public schools qualified too, and, as of Thursday, Chicago Public Schools said that it had offered 8,000 of its educators the opportunity for vaccination as part of an agreement with the Chicago Teachers Union that is paving the way for the nation’s third largest city to reopen schools after a protracted battle.

Prioritizing vaccines for teachers, and delaying reopening a few weeks so educators could receive first doses, were among the critical concessions the city made to break the stalemate between the district and its teachers union.

The irony is not lost on child care workers: Public schools have mostly stayed closed to students until now. Child care centers largely have been open since late last spring or early summer.

That hasn’t made it any easier for early childhood educators at nonprofits or private day cares to find appointments for vaccinations. Depending on with whom you speak, you hear an ever-shifting reality of hunting for appointments, dealing with last-minute scheduling, and worrisome rates of hesitancy among a workforce that’s mostly women of color — one late January survey by Chicago’s Latino Policy Forum shows that, of 403 employees across multiple agencies, only half would take a vaccine. Thirty percent were on the fence, and 19% were unwilling.

No single agency oversees early childhood education in the state, either, so providers described searching for information from multiple agencies, and, in some quarters, frustration.

“We’re being tossed back and forth like ping pong balls,” said Geronimo, who said she supports the idea of public school teachers getting a priority spot in a queue. Still, she would like to see a city make a more unified effort on behalf of day care workers whose services are necessary if families are going to return to work.

Geronimo’s center is licensed for 59 children, but multisite center operators and educators at large nonprofits say they have been scrambling, too. “It’s become a full-time job trying to secure vaccines for staff,” said Bela Mote, CEO of the Carole Robertson Center for Learning on the city’s South Side.

“There is a long line of people wanting to get vaccinated, but again our staff have been in those classrooms, and they’ve been in there for several months now,” said Curt Holderfield, vice president of child development and youth services at Ada S. McKinley, a community nonprofit that oversees 17 child care sites across Chicago.

City health department officials repeatedly have said the risk of contracting the coronavirus is low in Chicago day care centers. From April 1 through mid-October, the city tracked 267 cases in Chicago centers, but the city did not provide updated data by press time despite multiple requests.

Still, enrollments continue to be lower than pre-pandemic — a point of concern industrywide as researchers sound the alarm on the long-term educational impacts of months of missed early learning.

As more child care workers get vaccinated, the hope is that more families will be comfortable sending their children.

“We want to make sure we advocate and get the message out — not only for our staff — but we want to communicate that our children are safe and the families we serve are safe,” Holderfield said. “Obviously we are touching a lot of lives.”

Supply-and-demand questions surrounding vaccinations have vexed cities and states nationally. In Illinois, the governor’s office has sent out frequent communications alerting child care workers that they now can receive vaccinations and providing lists of vaccination sites. In Chicago, which gets its vaccine supply directly from the federal government, the city set up an online survey to help route early childhood educators to sites with available supply.

In a late January webinar on vaccinations specifically for early childhood educators, Dr. Jennifer Seo, the medical director for the Chicago Department of Public Health, encouraged participants to register with the city via the survey — but stressed patience as public health officials confront limited supply and high demand.  “It’s going to take some time,” she said.

“We recognize the contribution you have given to our city, providing a safe space for children,” the city of Chicago’s director of early learning, Jennifer Alexander, added. “You’ve been at it. You’ve been definitely prioritized.”

Still, those on the ground say securing a vaccine takes more than patience — it takes luck and persistence.

Reyna Valdez, an early childhood educator at Carole Robertson Center who has been back at work since June, received her first vaccination through her regular physician. She didn’t even call seeking an appointment — she had called for a physical and got offered a same-day appointment.

She couldn’t just drop everything and leave her tiny charges, but she spoke to her supervisor and her doctor’s office, and she was able to arrange an appointment the following day. Valdez, whose father died off COVID-19, said she is “thankful.”

Valdez said she didn’t have any hesitation about getting vaccinated, but she has family members who are skeptical.

About half of the teachers surveyed by the Latino Policy Forum were willing to take the vaccine, but 30% wanted to wait. An internal survey at Carole Robertson showed slightly more than a third were willing. Even more, about 40%, preferred to wait and see.

Tamera Fair, who owns four child care sites across Chicago, said she has informally polled her staff about who would take a vaccine and said willingness varies by site. At one of her locations, none of her 10 teachers currently wants to receive the vaccine; at another site, only 20% are willing.

“For those people who remember or have been taught the Tuskegee experiment, there’s this thought: ‘I don’t want them giving me any virus I can’t get rid of,’” she said. She’s also heard staff members discuss fears of adverse reactions, even deaths. “Those fears might be inflated but people still have them.”

Ultimately, says Dara Munson, CEO of the Chicago Child Care Society and Family Focus, which employs nearly 400 people across an array of programs for young children and families, any effort to educate and vaccinate early childhood workers will boost efforts to confront vaccine fears more broadly in communities.

This article was originally posted on Chicago’s teachers will get vaccinated. When will its child care workers?