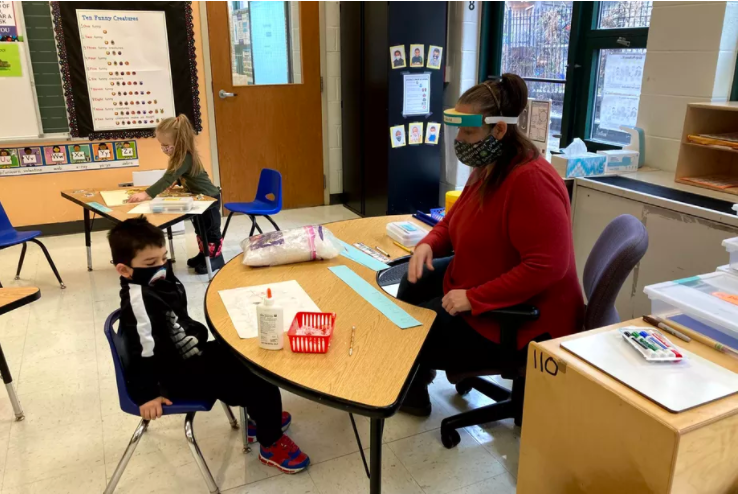 Chicago Public Schools administrators are asking the governing board to allow officials to require that employees get the COVID-19 vaccine — although they say they have no plans to impose such a mandate for now.

The administration does plan to require disclosure of vaccination status — so the district can track how many staff members have gotten shots other than ones offered at four vaccination sites that the district opened last week.

At its Wednesday meeting, the board will weigh whether to allow the district’s chief executive officer to require proof that job seekers and current employees obtain a coronavirus shot as a condition of employment, though they would get exemptions based on medical conditions or “sincerely held religious belief, practice, or observance.”

If approved, the rule also would allow district officials to call on all employees to report to work in person, something the rule says is “an essential function of most jobs.” That provision echoes the district’s recent standoff with its teachers union over reopening elementary schools, when the union directed members to continue working remotely.

But in a written response to questions, a district spokesman suggested the policy would simply give the district the flexibility to mandate vaccines in the future.

“The district does not have immediate plans to implement this as a requirement,” spokesman James Gherardi said.

Based on the district’s online vaccine tracker — the most up-to-date information now available according to the district — 14,000 employees have been offered the COVID vaccine. The district does not have data on how many have actually received it — or how many declined to get vaccinated.

Educators and support staff in grades kindergarten through fifth grade returned to school buildings today as the district prepared to welcome back students in those grades next week.

Across the country, a growing number of districts and states such as Utah have signaled they will not require teachers and other school employees to get vaccinated. Under current federal rules, employers cannot mandate any product under emergency use authorization, like COVID-19 vaccines, though that could change once the shots get full approval. Many parts of the country, as in Chicago, have been more preoccupied with getting enough shots to teachers and other school workers interested in getting the vaccines.

In a recent interview with Chalkbeat, Randi Weingarten, the head of the American Federation of Teachers, also argued districts should not make the vaccine mandatory for educators.

On social media, some teachers and others, including Chicago Teachers Union Vice President Stacy Davis Gates, criticized the proposed rule, arguing it conflicts with the district’s insistence vaccines should not be a prerequisite for reopening schools during the recent tense negotiations with the union. The union had wanted all its members to be offered a COVID shot before being required to report to work in person.

The policy says such a move would be “consistent with all relevant laws,” suggesting the district might be anticipating changes in state or federal legislation.