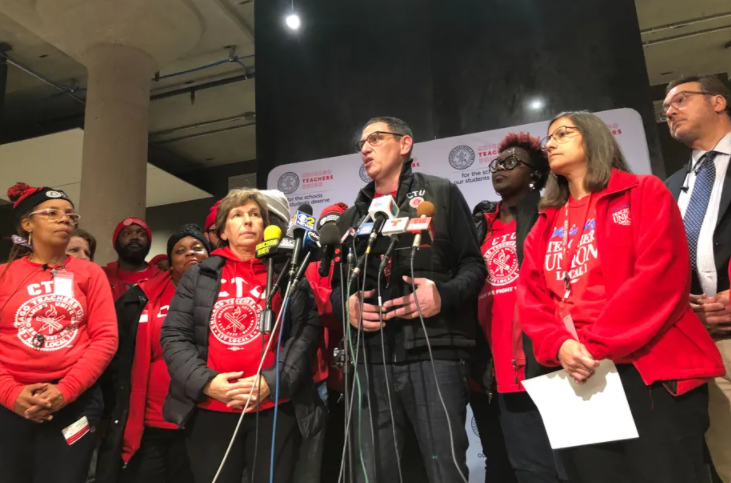 Amid a stalemate in reopening negotiations, the Chicago Teachers Union is threatening a Wednesday labor action in which high school educators would refuse to work from school buildings unless an agreement is reached with the district before then.

That means high school educators will walk into buildings Monday on their planned return date, but would revert to teaching remotely Wednesday if a reopening agreement remains out of reach.

High school students have the option to return to school buildings starting April 19. But some students are supposed to report to classrooms Tuesday to take the SAT.

The resolution, passed Sunday evening by members in the union’s House of Delegates, aims to put pressure on the school district to reach an agreement, with a de facto Tuesday evening deadline before the union’s first labor action.

It’s a tactic reminiscent of the bitter labor dispute between the union and Chicago Public Schools this past winter that delayed elementary and middle school reopening dates several weeks. On social media, some parents lamented another threat of infighting and the potential for fresh disruption.

At a Monday morning press conference, Chicago Teachers Union President Jesse Sharkey said that young people have driven an uptick in COVID-19 infections in the city. The union is pressing the district to make surplus shots at four school-based vaccination sites available to high school students and vulnerable family members. Sharkey stressed that the union wants a program in place to begin vaccinating students before high school buildings reopen — and said the union is not asking that all students are offered shots or that a portion are actually vaccinated.

“We’re asking for some basic safeguards and reassurance we are not pouring gas on the fire,” he said.

Sharkey said that if high school teachers do refuse to report to school buildings Wednesday and the district locks any of them out, that could set off “broadening implications,” presumably affecting in-person instruction for younger students as well.

Union officials criticized the city of Chicago for so far failing to open up vaccinations for teens ages 16 to 18, even as the rest of Illinois and neighboring states have moved to do so (the city has said it plans to expand eligibility Apr. 19 due to supply concerns).

If teachers revert to remote work, it could limit the amount of time they would have to set up their classrooms, potentially delaying the return date for students. Many teachers haven’t returned to their rooms since schools closed last spring.

High school teachers were asked to return to Chicago school buildings on Monday for the first time since schools were first shut down a year ago. But without a labor agreement — and with ongoing questions about how many students will return to in-person learning — there are big questions about what Chicago’s high school reopening will look like.

Initially, district and union officials suggested discussions were promising and had taken on a more collegial tone compared to the protracted battle earlier in the year around reopening elementary and middle campuses.

But that optimism soured last week, with the union publicly raising concerns about reopening high schools amid an uptick in city-wide COVID-19 rates. The district, for its part, has said it is committed to the April 19 reopening date it set a month ago, and believes classrooms can be reopened safely for older students.

An agreement to reopen Chicago’s high schools would cover about 5,000 teachers and paraprofessionals. Educators who were expected in buildings earlier this year but received health accommodations have also been asked to return to classrooms Monday.

Union officials have said they want an agreement that grants educators a remote work day Wednesday, child care and health accommodations for teachers who request them, and a student vaccination plan for ages 16 and older. Chicago Public Schools said they are working with the city’s public health department on such a vaccination plan, but the district has not shared any details.

At the Monday press conference, union officials said high school class schedules and accommodations to allow some members to work remotely still remain sticking points in the talks after the weekend. Still, union leaders underscored the demand for a high school student vaccination plan, saying the district must act decisively to rebuild trust with students and their families.

“Schools are already set up to administer vaccines,” said Mike Smith, a member of the union’s bargaining team. “Why can’t we shift it to the community? That’s what builds trust?”

He said some of his students at Englewood STEM High School have been asking about the possibility of getting vaccinated; some have gotten sick or have seen family members get the disease.

The union is still demanding a weeklong delay in bringing high school students back, though Sharkey said that could change if an agreement with the district is reached quickly.

The back and forth shows how much more complicated it is to open high schools compared to elementary or middle grades. High school students change classes more often, which makes it difficult to establish the strict pod structure that elementary and middle schools have adopted to minimize contact. Older students are also more likely to catch, and transmit, the virus, research shows.

At a union press conference held last week, teachers said they wanted a firmer plan for keeping students and teachers safe. Taft High School teacher Eden McCauslin said she was worried that the district will reopen and “figure it out as we go along.”

Another teacher, Mary Rose O’Shea, said last week at the press conference that educators in her building who requested accommodations hadn’t heard back yet.

A Chicago principal at a small high school, who asked to remain anonymous for fear of reprisal, said she was prepared to reopen her building for students on April 19, but that effort had been hard won.

She said she learned the date that students would return just as it was released to the general public in mid-March.

While she estimated that the majority of her staff will return to work in person, she only learned who had received accommodations after spring break, setting off a two-week scramble to find additional staff or shift schedules to fill those gaps. “That doesn’t give me a lot of time to make alternative plans,” she said.

Only around a third of her students said they would be returning to in-person learning for the fourth quarter. That’s in line with the district average: among the city’s 72,947 high school students, 35.6% said they would return, 45.3% said they would continue to learn at home, and 7.5%, or nearly 2,000 families, didn’t reply.

Because it is a relatively small school, her building will be open for students four days a week. Her message to families, and the district, is that principals need to be included earlier in reopening plans for the process to run smoothly.

She suspects that some families opted out of in-person learning because she didn’t have answers to some of their questions about school safety. “The reason we don’t have a lot of answers for them,” she said, “is because we learned about high school reopening at the town halls, the same way they learned about it.”

District leaders have said that they are determined to reopen high school buildings to students this school year, and the district’s elementary and middle school reopening has paved the path for returning high school students to classrooms.

Still, even when students return to the classroom, the complicated nature of remote work accommodations and class setups to reduce the likelihood of COVID-19 infections mean that many students will still be learning online. A survey by a Chicago’s principals group says students in as many as one-third of reopened classrooms may have an educator teaching virtually from home — and this scenario is much more common in schools that serve primarily Black and Latino students.

Essence-Jade Gatheright, a senior at Lindblom Math & Science Academy, is sticking with remote learning through the remainder of the school year. Remote learning has been “extremely hard,” she said, and she didn’t feel she received enough support with college applications or enough guidance on school work. But with COVID-19 rates rising again in the city, she doesn’t feel safe returning to the building and doesn’t fully trust the district with mitigation measures.

Still, she expects the district’s high school reopening will affect her as well. She doesn’t think teachers juggling in-person and virtual students will be able to engage with students learning remotely as much.

“I can’t see this getting any better,” she said. “It’s just not ideal for anyone.”

Talks between union officials and district leadership were expected to resume Monday.