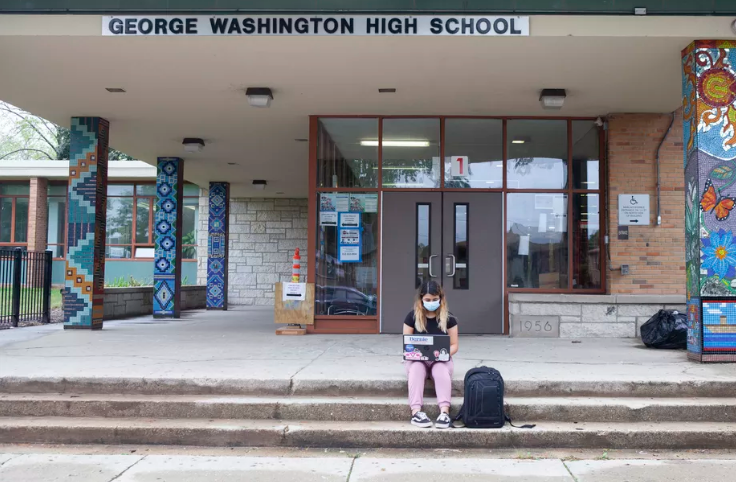 Chicago Public Schools said it will aim to reopen school buildings for high school students on April 19, the start of the fourth quarter, pending ongoing negotiations with the city’s teachers union.

Under that timeline, Chicago Public Schools’ buildings would be open for students of all grades this spring for the first time since the coronavirus pandemic shuttered schools across the country one year ago.

In a statement on Tuesday, district leaders described talks with the union as “productive” so far and said the April 19 reopening was a “target” date.

But later in the evening, the union responded, saying it had yet to agree to any reopening date for high schools and that its negotiating team lacked critical data, including numbers on teacher vaccinations. (As of March 16, the district said it had offered the vaccine to more than 52,000 staff through a combination of its own school-based sites and opportunities via independent contractors, but it did not have a thorough accounting of how many staff members followed through.)

The union also criticized the district for “uneven” coronavirus testing protocols for staff and students; the district has said it plans to roll out student COVID-19 testing later this week.

Meanwhile, families have until Friday to tell the district if they want to return to in-person learning. Elementary and middle school students, some of whom began returning to classrooms at the beginning of the month, have another chance to opt in to hybrid learning for the fourth quarter that starts April 19. Around 77,000 high school students also have the opportunity, for the first time, to select an in-person option.

A joint task force of union and district officials has been negotiating the agreement to reopen high schools.

In an email to families Tuesday, the district struck an optimistic tone. “Following the successful reopening of our elementary schools as well as new guidance from the Biden Administration that supports bringing students back to classrooms, we know we can safely resume in-person high school instruction as long as the right plan is in place,” said schools chief Janice Jackson and the district’s No. 2, LaTanya McDade, in a joint statement.

Other districts, including some suburban districts around Chicago, as well as New York City public schools, have set high school return dates for March and April.

When Chicago high schools return, they’ll follow a hybrid model similar to the ones in CPS elementary and middle schools. In-person students will be divided into pods and learn in-person part of the week and remote the rest, according to a district meeting for families on reopening high schools.

Chicago will hold a second public meeting for high school families on Wednesday at 5 p.m. You can RSVP here.

District officials have pointed to declining attendance and slipping academic results across grade levels as part of their push to return students to in-person learning.

“The attendance drop was most notable in high schools,” said McDade, the district’s chief learning officer, at a board meeting in January, noting that, district-wide, Black students saw the biggest drop in attendance. “Our Black and brown students are struggling with online learning.”

High school attendance dropped by 4.3 percentage points to 84.6% during this year’s second quarter compared to 88.9% last year. That’s higher than the 1.3% drop in attendance across all district-run schools.

At a community forum on reopening high schools held last week, district officials laid out school safety plans and shared strategies to engage high school students. The district’s safety plan will include a contact tracing plan led by a newly hired team working at the district level, and random testing of students at schools in some of the city zip codes hardest hit by COVID-19.

The engagement strategies include a student-led advisory team that would hold conversations with other students about the district’s planned high school reopening plan, a high school student reopening town hall also led by students, and a district-wide survey on improving the quality of both in-person and remote learning for high school students.

The district also said it would do its best to ensure that students would remain with their assigned teachers upon returning to in-person learning.

About 61,000 students in prekindergarten through eighth grade, as well as some high school special education students, are expected in school buildings in the first two waves of Chicago’s school reopening. The district has not yet released student attendance numbers for all of these grades.

As Chicago moved to reopen elementary schools at the start of this year, families and students became increasingly vocal in their push for a high school reopening timeline. “No one ever talks about high school,” said Maria Guerrero-Suarez, the mom of two students at Curie High on the Southwest Side. “It feels like we are a forgotten group.”

Public health guidance has largely pointed to minimal spread in schools where precautionary measures, such as wearing masks and social distancing, are in place, though that can shift depending on neighborhood COVID-19 rates. Research also shows that while most children and adolescents are less likely to contract and spread COVID-19 than adults, students over the age of 10 are more likely than younger students to contract the virus.

The national timeline for vaccines for people under the age of 18 is uncertain. While some forecasts have said that vaccines for children could be available by the start of school in September, others show a longer timeline, and either way they are unlikely to be available in the spring.

At Lake View High School, a highly rated neighborhood high school of 1,300 students in the Lake View neighborhood, some students have already been coming into the building for some athletics and to fill out college applications. That’s helped Lake View test drive its safety protocols, Principal Paul Karafiol said at a community forum on Wednesday.

The school also holds a weekly meeting of teachers, administrators, security engineers, the facilities manager, and starting this week, it will invite parents and students. “We’re trying to involve as many stakeholders as possible so that we make plans that really work for the school,” said Karafiol.