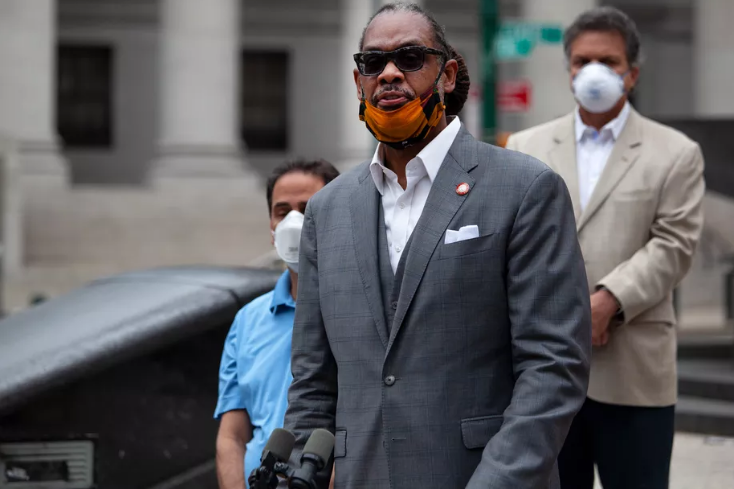 By CLAUDIA IRIZARRY APONTE on February 26, 2021

Employees were asked for campaign work and contributions — both banned under ethics rules — a former staffer alleges. The complaint also contends that Cornegy planned campaign activities with his top aide while on the job.

Councilmember Robert Cornegy Jr. improperly used his office to jumpstart his campaign for Brooklyn borough president — asking staffers for donations and to work for free on his run, a complaint filed by a fired former employee charges.

In the complaint, pending for the past year with the City Council’s human resources and Equal Employment Opportunity offices, the ex-employee also alleges the Brooklyn Democrat planned campaign activities with his chief of staff, Sarissa Phillips-Singletary, while on the job.

“I have concerns about conflicts of interest in the office. Council Member Cornegy is seeking the office of Brooklyn Borough President, and Sarissa performs work for that campaign,” the former staffer wrote in the complaint, obtained by THE CITY.

“I have concerns that too much of her attention is focused on that work, and that she is neglecting her duties as Chief of Staff to the Council Office of the 36th Councilmanic district,” he added.

Soliciting campaign donations from subordinates is forbidden under the City Charter, while city ethics rules prohibit campaign activities while on government duty. Council members and staff may campaign so long as the work is done on personal time.

The filer of the complaint says he was terminated in early 2020 after repeatedly clashing with Phillips-Singletary — whom Cornegy thanked last week by name during his online campaign launch event as part of a “big shoutout to my team that put this together.”

The former staffer, who asked THE CITY to withhold his name, noting he still works in the political realm, charged in the complaint that Cornegy presided over an “oppressive, toxic, and hostile work environment.”

A City Council spokesperson said the Council could not confirm or deny the existence of any complaint. Emails obtained by THE CITY show the Council acknowledged receipt of the filing by the former employee.

A second former staffer and a current employee told THE CITY that Cornegy personally asked them to contribute financially to his borough president campaign. Neither did, they said.

All three said Cornegy and Phillips-Singletary also asked staffers to do campaign work for no extra pay. The complaint to the Council alleges that Cornegy requested that the employee compile quotes for the campaign from media sources during work hours.

Phillips-Singletary “also inappropriately uses the prospect of working for Council Member Cornegy as Borough President, should he win, assuming everyone wants to move on with him,” the former employer wrote in his complaint.

City payroll records, meanwhile, show Phillips-Singletary received substantial additional pay above her salary in 2019. The nearly $160,000 she pulled in that fiscal year put her more than $10,000 ahead of Council members’ salary and about $5,000 below Speaker Corey Johnson.

A spokesperson for Cornegy’s Council office said in a statement that an independent, eight-month investigation by the City Council “determined that virtually every claim in a complaint from a disgruntled former staffer was unsubstantiated.”

“CM Cornegy proceeded to implement comprehensive corrective actions, including discipline and training, to address the single area where recommended,” added the spokesperson, Raul Rothblatt, without specifying what that area was.

“Rob has always put the needs and interests of his constituents above all else, and he demands accountability and excellence from his team at all times,” Rothblatt added. “Rob holds himself — and his entire team — to the highest standards, and his commitment to these bedrock principles are why Rob remains such a respected leader in the community.”

The complainant said he was in contact with the Council’s EEO compliance officer as recently as last week and was not made aware of any resolution to his complaint.

The term-limited Cornegy, who has represented parts of Bedford-Stuyvesant since 2013, leads the field of borough president candidates in fundraising. Other contenders include Assemblymember Jo Anne Simon (D-Brooklyn) and Bushwick Councilmember Antonio Reynoso (D-Brooklyn).

On Tuesday, the city Campaign Finance Board issued Cornegy $576,507 in public matching funds, based on nearly $250,000 in private donations.

Former city Conflicts of Interest Board Chair Richard Briffault, speaking generally, told THE CITY that elected officials found to have asked staffers for donations or to work for free could face fines.

Under the City Charter, any use of government resources — from equipment to office space to staff members’ time — is off-limits to campaign work, Briffault said.

He noted that former Brooklyn District Attorney Charles Hynes and some of his top aides received substantial fines in 2018 for engaging in and encouraging campaign work on government time during the then-DA’s failed 2013 re-election campaign.

“Asking people to work for your campaign, using government resources on government time — all that would be a violation of the City Charter,” Briffault said.

Campaign ethics guidelines as outlined by the City Charter are sent periodically to Council members and staff, most recently in January, the Council spokesperson said.

Phillips-Singletary joined the Council as Cornegy’s chief of staff in 2017, after briefly serving in the same role for former Brooklyn Councilmember Darlene Mealy. Her husband, Lenny Singletary III, chairs Brooklyn Community Board 2 and handles community relations for Brooklyn Hospital, which has a major real estate development deal in the works.

In fiscal year 2019, running through that June, Phillips-Singletary had a base salary of $92,000 — but the same city payroll records indicate a total of $159,748 in compensation.

Speaking in general terms, the Council spokesperson said members have discretion in how much they pay their staff, including salary and one-time payments.

“Sarissa at times voluntarily performed outside work on behalf of the campaign, which is legally permissible and appropriate,” said Rothblatt, Cornegy’s spokesperson. “She did so in full compliance of all the rules and regulations governing such work.”

Another former staffer in Cornegy’s Bed-Stuy office recalled an incident early last year in which, she said, Cornegy asked to speak with her in his office.

For a moment, she thought she was in trouble — until, she told THE CITY, “The Council member asked me directly to donate to his campaign.”

He asked her for a $25 contribution, she said, “which is more than what I was earning per hour” at the time.

Public records show that Shawn Francis, Cornegy’s budget director, made a $25 donation to the campaign around that time. That donation was worth an additional $200 in taxpayer-funded matching dollars from the city Campaign Finance Board.

Francis did not respond to a request for comment from THE CITY.

At a time when many candidates are swearing off contributions from the real estate industry, Cornegy, who chairs the Council’s Housing and Buildings committee, has raised from numerous donors in the sector.

Among the contributors: potential mayoral candidate John Catsimatidis and his wife Margo, who gave a total of $1,800 in February and March 2020, and Donald Capoccia, developer of the Bedford Union Armory and other projects in the borough.

Borough presidents have an influential advisory vote on zoning changes affecting development and can direct subsidies to favored projects.

Cornegy also received $1,000 from the Police Benevolent Association’s political action committee in July 2019. “The answer to bad policing is not no-policing, it’s good and better policing” he said on Feb. 11. “I’m not the guy who’s gonna say ‘Defund the Police,’ we all know that.”

He’s racked up endorsements from several Hollywood stars, including Brooklyn-raised filmmaker Spike Lee and comedian Tracy Morgan. Lee headlined a November 2019 fundraiser for Cornegy, at which Phillips-Singletary cut the cake.

“I want to thank Sarissa for being amazing and for helping to keep this train moving, and for being everywhere we needed her to be,” Pierre said. “So we really want to give a shoutout to Sarissa.”

Cornegy named-checked a bevy of Brooklyn Democratic leaders, including former Democratic county boss Frank Seddio and Assemblymember Erik Dilan (D-Brooklyn), who was fined $9,000 by the COIB in 2015 for taking an affordable apartment in his district that the then-Council member did not qualify for.

Morgan, Wright and Cornegy spoke at last week’s campaign event, which was held virtually because of the pandemic. The proceedings started with an invocation to prayer and performances of “The Star-Spangled Banner” and “Lift Every Voice and Sing,” often referred to as the Black national anthem.

At times during his stump speech, Cornegy veered into victory speech territory.