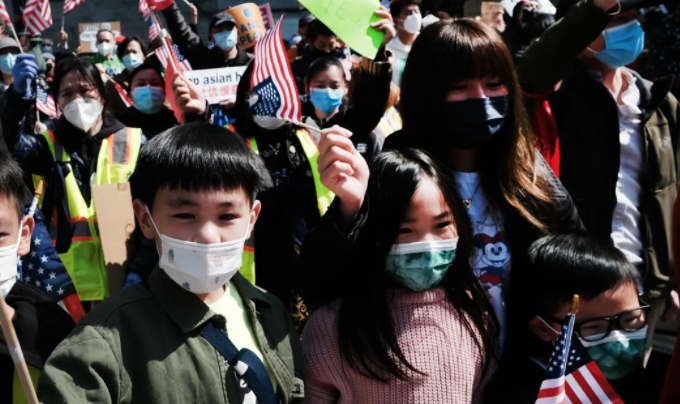 Anti-Asian racism overwhelmed me this year. So I started speaking out.

I feel myself getting punched every time I see a photo of an Asian American person being brutally attacked while simply walking down the street, entering a supermarket, or strolling through a park.

I don’t have the option to look away. Since February 2020, my social media has been clogged with videos of individuals like me being assaulted. I feel scared to leave my home in broad daylight, and feel sick that these images build on the false narrative that my community is fragile, apolitical, and silent.

I’m a 17-year-old Asian American teenager from the heart of Queens, New York and I love my culture. From the regular family gatherings to the bun bo hue my mother makes to the yearly Lunar New Year celebrations, I have pride in my Vietnamese-American household. But my pride is tempered by the fear that my looks will be the reason for my attack the next day.

This pandemic showed me that we need a way for Asian Americans, especially Asian American young people, to express our hatred for the anti-Asian racism in our world. So in March 2020, I created Virus: Racism, a youth-led campaign aiming to raise awareness of the discrimination against the Asian American community due to COVID-19.

I began by reaching out to young people and asking them to share stories about the anti-Asian racism they had experienced due to COVID-19. That allowed me to hear about how someone else was scared to step outside, and learn that one of my classmates was spat on because of his Asian American identity. Then I posted their testimonies on social media. To us, words mean power.

I’ve used the platform of Virus: Racism to share how we can no longer take the violence against our community. I’ve spoken at the New York State Asian Pacific American Task Force town hall and organized a youth forum on race with several candidates running for city and state office. We’ve also expanded the campaign to touch on topics that have long faced the Asian American community, such as the stigma against addressing mental health issues and our need to stand in solidarity with other communities of color.

A year after I started it, Virus: Racism has become my outlet to condemn both the history of anti-Asian hate in the U.S. and the current virus of racism against my community — a virus that continues to spread. My worst fear became a reality in March when a white supremacist killed six Asian American women in Atlanta, Georgia.

Anger, frustration, sadness, confusion — I felt every negative emotion but surprise. For days, I couldn’t do anything but think about how it could’ve been my mother who was killed. I also felt frustrated that it took a mass murder to prove that hate against the Asian American community was an issue. Virus: Racism helped raise awareness of the victims who lost their lives in Atlanta and reiterate the need to support Asian-owned businesses, host regular conversations on anti-Asian racism, and share our stories.

We plan to advocate for three ideas at Virus: Racism. The first is a culturally-responsive education that incorporates Asian and Asian American studies into every class we take in school. By learning about Asian American struggles in our curriculum, we will be closer to having a culturally competent education.

The second is an Asian American affinity space in every school. All Asian American students deserve a space where we can connect with other students like us to share our experiences as Asian Americans in a segregated school system.

The third is a continued need to share our stories as Asian American young people in this world. The most important step that we need to take is to continue amplifying our stories so that our words can survive. The goal of Virus: Racism will always be to raise awareness of the discrimination against the Asian American community due to COVID-19 through storytelling, awareness, and advocacy.

In the future, I hope to feel pride for my Vietnamese culture without also feeling afraid of being me.

This article was originally posted on Anti-Asian racism overwhelmed me this year. So I started speaking out.