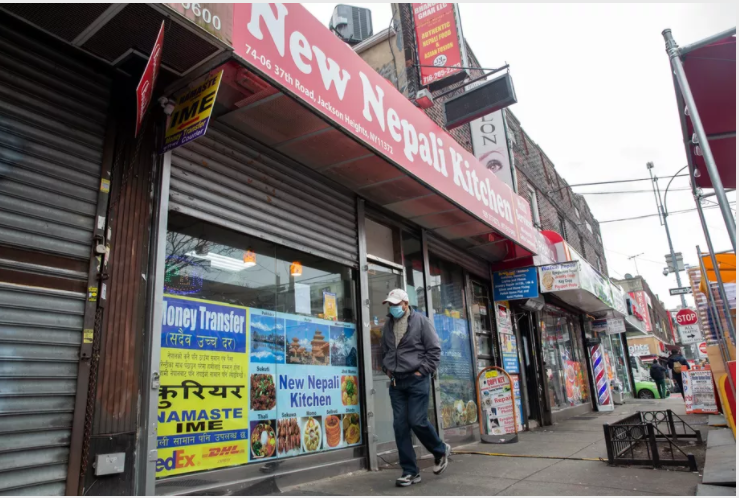 But the bill’s passage is anything but certain and those with so-called temporary protected status (TPS) — many of them serving as essential workers amid the pandemic — are reminded of broken promises from the past.

Wary TPS holders told THE CITY that, after living for years with the looming threat that their protection would expire, they’re only cautiously optimistic on Biden’s push after five presidential administrations have failed to grant them a path to citizenship.

Gianni Gustave, a 28-year-old TPS holder from Haiti who lives in Flatbush, said he dreams of a life no longer in limbo, one where he could purchase a car and a home.

“I just want a shot at living as a young American which is how I see myself out there all these years.”

The TPS designation was created by Congress in 1990 to protect civil war refugees from El Salvador. Later, the same protections were extended to others who arrived in the United States and were not able to return due to a disaster in their home country — civil war, environmental disasters like hurricanes or other extreme circumstances.

The U.S. Citizenship Act, introduced by Biden on Jan. 20, would allow those under TPS — many of whom have lived a tenuous existence in the city for decades — to receive immediate green cards and apply for citizenship after three years.

If passed, the bill would also allow those in the Deferred Action for Childhood Arrivals program the same fast track to citizenship for those with TPS. Undocumented people living in the U.S. could see the same within eight years.

For Rep. Nydia Velazquez (D-NY) the early push by Biden, with Democrats controlling the House and Senate, offers a unique — and urgent — window.

“I was there when [it was] Obama and I’m here now,” she said. “I feel optimistic. Because if we don’t do it in the next few months, then around the corner there’s going to be elections. Forget about it.”

Velazquez, whose congressional district spans lower Manhattan, Brooklyn and Queens, has sponsored multiple TPS-related bills over the years, including a residency bill that passed the house last year only to die in the then-Republican-controlled Senate.

While people granted temporary protected status can work in the U.S. legally and are shielded from deportation, they cannot travel without authorization from the U.S. Citizenship and Immigration Services.

Every year, the president decides whether or not to continue the program. This has meant years of uncertainty for those who hail from countries like El Salvador, whose protections have been extended for over two decades.

Aside from the emotional toll, the economic burden mounts as required background checks and application fees can surpass $500 each time the status is renewed.

Last year, Trump sought to end TPS for six of the 10 eligible countries, a move that was approved by a federal appeals court in September. But the cut did not happen because the appeals court did not issue the directive to the lower district court in time, according to the Department of Homeland Security website.

That delay allowed TPS protections for people from El Salvador, Haiti, Honduras, Nepal, Nicaragua, and Sudan to extend at least through October 2021, rather than ending on Jan. 4, 2021.

This gave TPS holders a glimmer of hope after the presidential election.

Looking to the Future

New York is home to nearly 50,000 so-called mixed status families composed of citizens and non-citizens — and is among the largest populations of TPS beneficiaries and their children in the nation, according to a 2017 analysis by the Center for American Progress.

They currently have no avenue to citizenship, despite many having lived in the United States for over two decades. Some hoped the status would continue to be renewed until their U.S. citizen children began to turn 21, giving them the ability to petition for their parents’ residency — another path to citizenship that the Trump administration had attacked.

The first time Angela Sherpa went to immigration court, she was still in her mother’s belly. The 24-year-old’s parents had come to the U.S. from Nepal in 1995 in search of more opportunities. The couple unsuccessfully sought legal residency here.

Sherpa grew up feeling insecure about her family’s prospects in Jackson Heights, where they’d bought a home.

“The uncertainty and the fear is not something I’d wish on anyone’s family,” Sherpa said. “We never knew what would happen.”

In 2015, her parents were able to get TPS after a devastating earthquake hit Nepal, killing nearly 9,000 people.

“We didn’t really see a long-term future in this country, based on how things were going the past few years,” said her father, Ang Dawa, 63, a private driver who was previously a trekking guide in Nepal.

“We have lived here, paid taxes here, and raised our family here and the Biden administration’s pathway to citizenship would finally allow us to imagine a long-term future here.”

Essential to the City

An estimated 12,500 TPS holders are employed as essential workers in New York, according to the Center for American Progress. Many originally from El Salvador, Haiti and Honduras work as home health aides, grocery store workers and in other key jobs.

Honduran-born Erasmo Ramos, 46, spent his last 23 years carefully building his own life in the United States. Despite being ineligible for federal student loans due to his immigration status, he graduated college and earned a masters degree in Administrative Sciences after arriving from Honduras in 1997.

Ramos worked his way up from working in laundry to managing a team of 250 janitorial, laundry and transport workers on the frontlines of the COVID-19 pandemic at NewYork-Presbyterian Hospital. It is also a job he is set to lose in October if TPS is not renewed.

After watching previous presidential administrations fail to pass much simpler immigration bills than the one before Congress now, Ramos said he’s taking nothing for granted.

“We’re not going to sit at home waiting for someone to speak for us, ” he said.

He joined the National TPS Alliance, an advocacy organization, to fight for a path to citizenship. The group is headed to Washington this month to pressure lawmakers to make protections permanent.

“I’m a person of faith, but I’m also a person who thinks that life’s achievements are made with actions, not just with words,” Ramos said in Spanish.

After what he called four stressful years of the Trump administration, he hopes that he’ll finally get a chance at true stability, and to see his family in Honduras again.

“Residency would be like giving oxygen to a fish running out of water, it would let us breathe,” he said.

Advocates acknowledged the bill faces a tough road ahead and said they hope it makes it through a polarized Congress without being watered down.

“There is a hopeful pessimism,” said Robert Agyemang, of African Communities Together, which organizes for immigrant rights. “Mainly because so many years of frustration. We see the tides shifting, the country trying to move into a new direction and even in a sense forcefully, but the country is still not where it claims to be or wants to be yet.”

The scope of Biden’s U.S. Citizenship Act has also given immigration experts pause as to whether the sprawling legislation can be passed as-is. Even the president professed he was open to Congress breaking the bill into smaller pieces.

On Thursday, Democratic Senator Dick Durbin of Illinois took the first such step — re-introducing the DREAM Act with his Republican counterparts. But while Durbin told reporters last week that TPS was a “top priority,” this bill would only benefit DACA recipients.

For Velazquez, Congress “shouldn’t be in the business of choosing winners and losers,” noting she is first working on passing a comprehensive bill with the Biden administration.

“This is a matter of fairness,” she said.

This article was originally published on After Years in Limbo, NYC Immigrants See Hope in Biden Plan to Help Make Temporary Stays Permanent