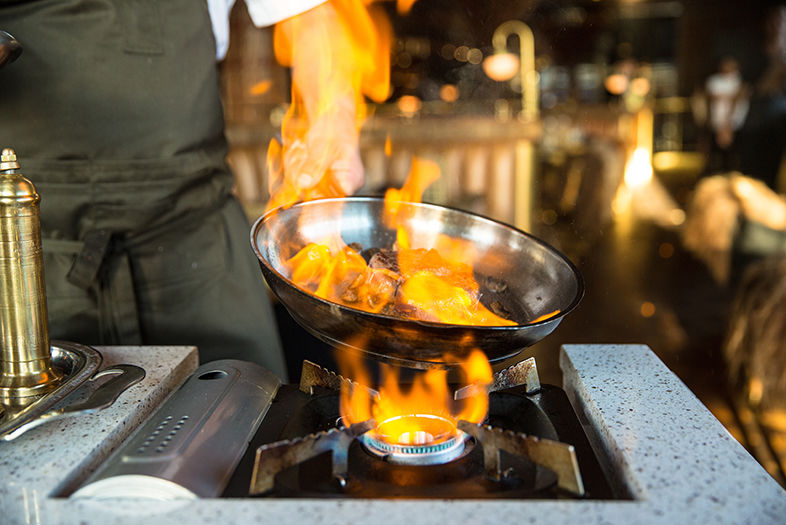 San Francisco restaurant owners, already simmering over covid-19 restrictions, are ready to boil over because of a city ban on natural gas stoves in new buildings that takes effect in June.

The ban, which also affects other gas appliances, is part of a statewide campaign aimed at reducing climate change-feeding carbon emissions as well as health hazards from indoor gas exposure. A similar ban went into effect in Berkeley in 2020; Oakland and San Jose recently passed similar measures, and other California cities are considering them.

Officials championing the bans say they’re responding to evidence that gas stoves emit dangerous levels of toxic gases such as nitrogen oxide, nitrogen dioxide and formaldehyde, which can cause heart and lung problems, aggravate asthma and contribute to early death, according to federally funded research.

Restaurant owners say it’s an outrageous, unnecessary law that will make expansions and opening in new buildings impossible. It puts salt in the wounds of businesses agonizing over covid restrictions, they add.

“If you get rid of the gas element, I don’t think restaurants can do it unless you’re like a coffee shop with a panini press,” said Matthew Dolan, executive chef and partner of restaurant 25 Lusk in San Francisco. “Whoever cooked up this idea should be reprimanded.”

Many are skeptical that properly vented stoves pose any health problems. Restaurants in California are required to have state-of-the-art ventilation systems that remove byproducts of burning natural gas and circulate fresh air, Dolan said. “The average employee isn’t really in contact with those issues,” he said.

The California Restaurant Association sued Berkeley in 2019 over its ban, arguing that it makes it impossible to prepare flame-seared meats, charred vegetables and wok-prepared dishes, putting steakhouses, ethnic restaurants and others out of business.

“You cannot cook with an electric wok,” said Vice Mayor Chin Ho Liao of San Gabriel, a Los Angeles suburb with 200 restaurants, mostly Asian. “You can cook with them, but it won’t taste good.”

Defenders of the law say it’s a long-delayed recognition of the harm of indoor pollution, which isn’t regulated by the Environmental Protection Agency, and is especially important since 87% of the typical person’s life is spent indoors.

Research shows clearly that gas stoves put out potentially dangerous levels of toxic fumes. Electric stoves also pollute, but at lower levels. While it’s difficult to prove gas stoves diminish health, studies have shown correlations between their use and higher rates of illness.

Buildings account for the second-largest percentage of San Francisco’s carbon footprint, next to transportation, and natural gas accounts for more than 75% of that. Roughly half of California homes use natural gas for cooking, according to the California Energy Commission. But health impacts are potentially a more immediate risk than climate change.

A study by UCLA’s Fielding School of Public Health in June found that in modeled scenarios where a gas stove and oven are used simultaneously for one hour, concentrations of nitrogen dioxide usually exceed the pollution levels dictated by national and California air quality standards. Gas appliances also release carbon monoxide and particulates.

“All of those have been shown to be detrimental to human health,” said Yifang Zhu, lead author of the UCLA study and a professor in the school’s department of environmental health sciences.

San Francisco Supervisor Rafael Mandelman, the sponsor of the city’s ban, said in a written release that building electrification is “a critical step in addressing the serious public health and safety hazards of natural gas, and of course the ever-intensifying climate crisis.” He also cited a report by the Rocky Mountain Institute, a clean energy think tank, which found high levels of harmful emissions in homes and businesses with gas stoves.

In November, California’s air regulation agency adopted a resolution to curtail emissions from gas appliances in buildings and said pollution could exacerbate covid-19. Climate activists are urging the California Energy Commission to include a ban on gas hookups in its next building regulations update, a move that would affect the entire state.

There’s been a similar push in Massachusetts. The nation’s oldest medical society last December became the first to recognize the health impacts of gas cooking — though it also noted that ventilation mitigates such effects.

When caring for children with asthma, health care practitioners should ask, “‘What kind of stove do you have?’” said Dr. T. Stephen Jones, a retired former Centers for Disease Control and Prevention official who co-sponsored a resolution on the matter passed by the Massachusetts Medical Society.

Society members were taken aback by the data on how gas stoves could make children sick.

“This is not really out in the general public. It’s not out among providers,” said Dr. Heather Alker, chair of the society’s environmental and occupational health committee.

Low-income people are at particularly high risk because they tend to live in smaller residences where gases can concentrate; may use kitchen appliances for supplemental heat; and cannot easily maintain or replace older equipment, especially if they rent, according to the UCLA study.

A government-funded 2014 study concluded that residents of 62% of the Southern California homes it measured were routinely exposed to nitrogen dioxide through hoodless appliances at levels that exceed health standards. A 2012 study done at the behest of the DOE found particulate matter from indoor gas burning could hurt lungs and reduce life expectancy.

As outdoor air gets cleaner, policymakers are focusing more on indoor air quality, which was “under the radar previously” and generally not regulated by state or federal governments, Zhu said.

Critics of the bans argue that electricity is more expensive than natural gas and will drive prices up, making it especially hard for low-income residents. And not all cities are on board with the move away from gas.

In addition to the near impossibility of properly stir-frying food with electricity, Liao is worried about making residents rely solely on the state’s overworked electrical grid, which was hit with rolling blackouts last year. He is pushing for the development of clean gas derived from methane captured from rotting food, a process called anaerobic digestion. Riverside has such a project. But the approach needs more funding and development to be scalable, the vice mayor acknowledged.

The gas ban could pose an extra burden on restaurants struggling to survive covid strictures, owners and chefs say.

“This is the last thing in the world we need right now,” said Dolan. “It’s an added burden on an already burdened industry.”

But advocates for the change say people need to look at the issue a new way.

“When you actually stop and think about it as ‘This is a gas-guzzling device that’s in the middle of my house,’ it is sort of like a mind shift,” said Brady Seals, a senior associate at the Rocky Mountain Institute. “I don’t think it’s unrealistic to think that, in a generation or two, we’ll come to a place where our kids can’t ever imagine why we would want to burn a fossil fuel in our kitchen that emits some of the same pollutants that come from tailpipes.”